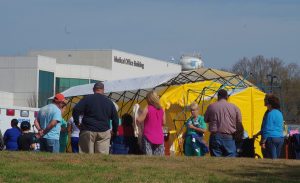 Staff and patients gather outside after a bomb threat Thursday morning caused the evacuation of Laurens County Memorial Hospital. (Photo by John Clayton)

The threat came into the hospital around 9 a.m. Security conducted an initial sweep of the building, and 46 patients along with hospital staff were evacuated.

Bomb-sniffing dogs from the S.C. Law Enforcement Division were used in an attempt to locate any explosive devices prior to the all-clear signal.

SLED, the Laurens County Sheriff’s Office and Clinton Public Safety responded to the threat. A second bomb threat was called into Palmetto Bone and Joint in Clinton and left on a recorded message. That call reportedly referenced the orthopedic surgeons’ practice at 2605 Kinard Street in Newberry. 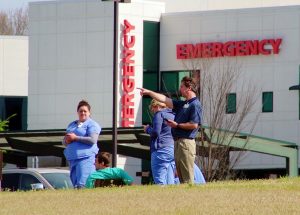 Laurens County Memorial Hospital staff members wait during the evacuation of the hospital Thursday morning due to a bomb threat. (Photo by John Clayton)

According to The Newberry Observer, SLED and the Newberry Police Department investigated and did not find any explosive devices.

Laurens Hospital and emergency personnel erected tents on the hospital campus for the evacuated patients, though several sat in the late-morning sun with hospital staff.

Spokesperson Jamie Adair said none of the patients were in critical care at the time of the evacuation.

Adair also said the hospital enacted a plan and protocols that had been rehearsed.

“It was a great team effort,” he said.