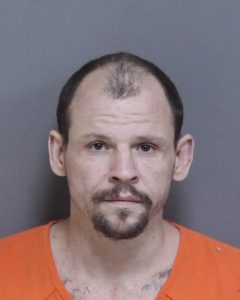 A two-day manhunt for a Gray Court shooting suspect by Laurens County Sheriff’s Office deputies came to an end Friday afternoon when Andrew Christopher Eaton was taken into custody.

According to LCSO Chief Deputy Jarvis Reeder, Eaton was arrested at a residence on Georgia Road in Gray Court.

Reeder said LCSO investigators were working with Greenville County Sheriff’s Department investigators and put together information that led to Eaton’s whereabouts and his arrest.

“It was peaceful,” Reeder said of the arrest. “He didn’t have a chance to resist.”

LCSO deputies had been searching for Eaton since being called to Hillcrest Hospital in Simpsonville Wednesday. There, a shooting victim with an abdominal wound identified Eaton as his assailant. Deputies then moved to a Gray Court residence on Cowens Bridge Road. Eaton fled into nearby woods and evaded capture.

Upon returning to the Cowens Bridge Road residence on Thursday, deputies discovered an operational meth lab. Eaton was not at the residence, but Timothy Allen Morrow, 34, was arrested and charged with manufacturing methamphetamine and three counts of child neglect.

LCSO deputies returned to the scene Cowens Bridge Road residence Thursday and discovered a working methamphetamine lab. Eaton was not at the residence, but Timothy Allen Morrow, 34, was arrested and charged with manufacturing meth and three counts of child neglect. He was transported to the Johnson Detention Center.