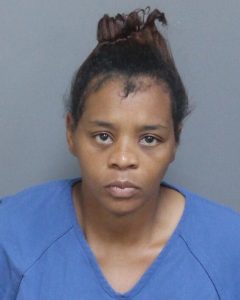 The mother of the infant whose decomposed body was found this past week at a Fountain Inn apartment complex has been charged with homicide by child abuse in the infant’s death.

Jamie Melissa Wilson, 41, of Gray Court, is being held without bond in the Johnson Detention Center. The infant’s body was discovered in a container on Monday, Sept. 18 by a Laurens County Sheriff’s Office deputy while serving an eviction notice at Fountain Hills Apartments in Fountain Inn.

Fountain Inn Police Chief Keith Morton said once the infant’s approximate age was determined by a forensic anthropologist called in after initial autopsy results were indeterminate, his officers were able to focus on the murder charge.

“We were able to identify some inconsistencies from our interviews with the science,” Morton said.

According to police reports, the child was born in October of 2016, but stopped breathing. The homicide charge by child abuse or neglect says that Wilson did not provide the child with potentially lifesaving and proper medical care when it went into distress.

Morton praised his investigative team as well as Greenville County pathologists and SLED’s Child Fatality investigators for their work.

“It was all about their ability to talk to (Wilson) and get her cooperation,” Morton said. “We’re still talking to other people, but we don’t know if charges will be filed. There may be some other people who were involved, and we’re not going to rule out anything. We’re going to go where the evidence takes us.”

Morton said there was at least one other older child in the apartment home, who has since been relocated through the S.C. Department of Social Services.