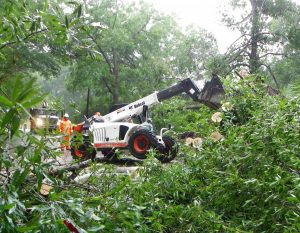 Remnants of Hurricane Irma swept through Laurens County Monday night, leaving behind a trail of downed trees, broken limbs and power outages in its wake.

The massive and powerful storm, which devastated the Caribbean before battering Florida and heading northwesterly toward Georgia and Alabama, scraped the Upstate with winds and rain Monday that lasted into the early hours of Tuesday morning.

The county’s emergency 911 center was among those without power for at least part of the night Monday.

Avery praised the work of emergency responders, utility workers and dispatchers during the storm. He estimated 911 dispatchers received more than 1,200 calls – or 50-60 calls per hour – between 7 a.m. Monday and 7 a.m. Tuesday.

Many of the calls were reported downed trees, limbs or power lines. Others reporting power outages were redirected to the power companies.

“When trees fall, it creates havoc on the roadways, and our responders did a great job of keeping those pathways clear,” Avery said.

Several thousand Laurens County residents were without power as of Tuesday morning as crews from Laurens Electric, Duke Energy and the Laurens County Commission of Public Works worked to restore electricity.

“CPW crews worked until 5 a.m. restoring power to all but a few isolated customers,” said John Young, Laurens County CPW general manager. “Crews from the city of Clinton will be assisting to help restore power for all remaining outages.”

Young urged any customers without power to call CPW at 681-4300.

“Also, please be careful outside,” Young said. “Many trees and tree limbs are unstable and could fall. Live power lines may also be downed on the ground. Thank you for your patience during this event.”

By Tuesday afternoon, the number of Laurens Electric customers without power in the county was down to a couple hundred, according to the LEC website.

“Outages this morning range from groups of 50-80 caused by broken power poles and trees on three-phase power lines to scattered individual outages, the majority of which are caused by fallen trees or branches,” LEC announced in a release Tuesday.

Co-op crews from North Carolina and contract crews were brought in to help with the problem.

Rural areas such as Hickory Tavern, Mountville and Waterloo were the hardest hit by power outages.

Duke Energy was working to restore power to more than 2,000 county residents.

The rural outages caused Laurens District High School Districts 55 and 56 to cancel school for the second-straight day Tuesday. Both districts initially announced that their schools would re-open after a two-hour delay Tuesday morning, but when heavy power outages were being reported in rural areas.

“We hated to cancel another day of school, but with the power outages, it was the right thing to do,” said District 56 Superintendent David O’Shields.

Schools from both districts were closed Monday because of safety concerns for buses operating in amidst wind gusts that were expected to be over 30 m.p.h.

Hurricane Irma hit Florida as a Category 3 storm, downgraded from the Category 5 that hit the Caribbean and Virgin Islands with wins in excess of 170 m.p.h. The storm also turned westward after hitting the Florida Keys, hitting Alabama and western Georgia with the force originally forecast for South Carolina that included winds in the 60-70 m.p.h range.

“If (Irma) had been on that original trajectory, it could’ve been terrible,” Avery said. “We could’ve seen a lot more structural damage.”