At noon Wednesday, S.C. Gov. Henry McMaster declared a state of emergency for South Carolina and urged residents to begin preparing for a hit from Hurricane Irma.

“This is a precaution – this is not an order of evacuation,” McMaster said in a press conference. “This declaration officially allows emergency management officials to begin execution of our state emergency preparedness plan on the state and local level.” 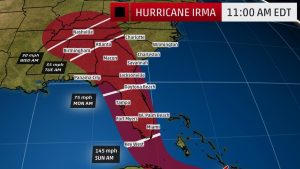 This map denotes the potential path of Hurricane Irma as of 11 a.m. Friday. The local area could see winds around 70 m.p.h., a Category 1 storm. The latest forecast shows Irma shifting to the west.(Map from weather.com)

Hurricane Irma, a Category 5 storm with winds in excess of 185 m.p.h., has hammered the Caribbean Islands and was expected to hit South Florida Friday. After striking south Florida, models by the National Weather Service show the massive storm moving up the Florida coast toward Georgia and South Carolina. If those models hold true, Irma could hit the Georgia and South Carolina coasts as early as Monday, bringing with it high winds and heavy rains as a Category 1 storm, according to the National Weather Service with winds potentially around 70 m.p.h.

Laurens County Director of Emergency Services Joey Avery said his department has been in contact with the state Emergency Management Department since early this week and local shelters are on standby if needed.

McMaster said it is important for residents to be prepared for the storm, whether or not it strikes the state with force.

“We’re not hitting any panic buttons,” Avery said. “But we want people to know it’s out there and be prepared.”

If Irma moves up the length of Florida and approaches the Carolinas, its outer bands would at least deliver heavy rains and winds to most if not all of South Carolina.

When Hurricane Hugo hit the South Carolina coast in 1989, the storm stretched across the length of the state, impacting Columbia, Charlotte and the Upstate, including Laurens.

If that were to happen again on a large or small scale, Avery said it is best for people to be prepared. He offered the following suggestions:

The City of Clinton also urges residents to begin preparations this weekend. Director of Risk Managemtn Robin Entrekin said those with special medical needs should be especially cognizant of those needs.

“Citizens that have medical conditions/concerns such as prescription medications or home based oxygen generators and similar medical equipment should begin making preparations now for back up sources such as ensuring medications are filled, alternative electrical energy sources are available, as well as having batteries and additional water/food supplies on hand in the event of a power outage,’ Entriken said.

“We make sure we have plenty of diesel for our vehicles, chainsaws and equipment,” he said. “We also make sure we have the supplies we need such as poles and things like that, and our purchasing agent started handling that at the first of the week.”

Young said his crews are also ready in case they are needed in other areas of the state.

“We just want to make sure everything is topped off and ready to go,” he said.