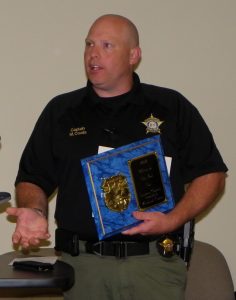 “This is such an honor,” Coates said after being presented the award by 2016 winner Lt. Tyrone Goggins of Clinton Public Safety. “I’m doing what I love in the county that I love.”

Coates was among three finalists for the award, which is in its second year, representing the LCSO, Clinton Public Safety and the Laurens Police Department.

The other nominees included Lt. Catherine Anderson, a veteran of Clinton Public Safety, and Laurens Police Officer Ben Gallo, who joined the department in 2015. The three were honored at a Law Enforcement Appreciation Day at the Higher Education Center in Laurens.

“It’s an honor,” Coates said. “I don’t come into my job for recognition but it makes you feel good whenever the people you represent let you know you do a good job. For me, that’s good.”

Laurens County Sheriff Don Reynolds called Coates, a 16-year veteran of the LCSO, the “glue that held everything together” after last year’s election in which Reynolds defeated long-time sheriff Ricky Chastain.

“From November after the election on, we had to keep the office going,” Coates said of the change in administrations at the LCSO. “You’ve got to keep morale going because it was a change, and we hadn’t had a change in a long time. We had to keep going in and doing what we were supposed to do for the public.”

In addition to his duties at the LCSO, Coates and wife Erica have also been the foster parents of two boys, ages 3 and 2 since 2014.

Erica Coates said her husband shies away from the spotlight, but earned his moment in it.

“I think it’s well deserved,” she said. “He’s a great guy, a great husband, a great father and a great law enforcement officer, and I’m a lucky gal.

“His job’s hard. He works a lot of nights and misses a lot of suppers, but this is what he’s called to do. God calls us to do things, and this is his calling.”