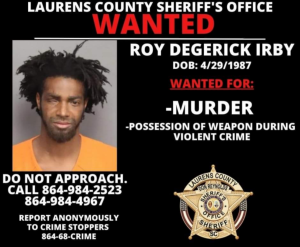 A man was shot and killed Tuesday night at a residence on Gray Drive in Gray Court, and the Laurens County Sheriff’s Office has named a suspect in the shooting.

The Laurens County Coroner’s Office identified the deceased as Trevor D. Anderson, 32, of Gray Court. He died at the scene of a gunshot wound, said Chief Deputy Coroner Patti Canupp.

The LCSO said Wednesday morning that Roy Degerick Irby, 35, of Gray Court is wanted for murder and possession of a weapon during a violent crime.

Anyone with information on Irby’s whereabouts is asked to contact the LCSO at 864-984-2523 or report anonymously to CrimeStoppers at 864-68-CRIME.

The shooting incident, which occurred around 8:30 p.m., continues to be investigated  by the Laurens County Sheriff’s Office and the S.C. Law Enforcement Division (SLED). An autopsy on the victim is pending.