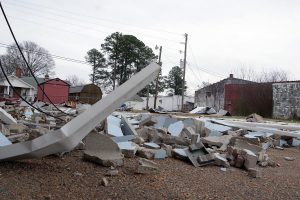 Rubble from the Joanna carwash after the building was destroyed by a tornado Friday night.

A control panel from the automated car wash in Joanna sat upside down in front of a pile of light blue cinder-block rubble, the remnants of a tornado that touched down there.

The EF-1 tornado had winds of 95 m.p.h. and destroyed the car wash while damaging a door across the way at the Joanna Volunteer Fire Department Friday evening just after 6 p.m.

At about that same time, either the same or another tornado was doing damage in the Renno community, downing trees and reportedly damaging the roof of at least one home.

The Clinton Fire Department also responded to a wreck on I-26 at Exit 59 after a car hit a tree that had fallen into the road around 5:45 p.m. 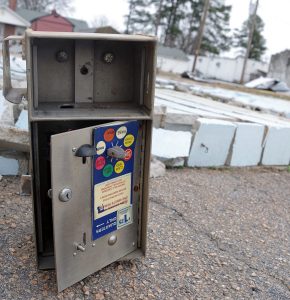 A control box sits in front of what used to be the automated carwash in Joanna.

“We don’t know if that was a tornado, but some people said there were circular winds out there at the time,” said Clinton Fire Capt. Boyd Taylor, who is also Renno’s Fire Chief. “When we arrived on that call, the wind was whuppin’ around pretty good.”

The Renno Volunteer Fire Department responded to calls near Renno Station 2 on Highway 72 of downed trees in the road and one that reportedly fell and damaged a barn.

Renno firefighters were able to clear down trees and limbs from the roads.

No one was injured in any of the storm-related incidents, including the wreck on I-26.

Plaxico said the department has already started the process of repairing the door, which was damaged by the storm’s 95 m.p.h. winds.

“We’ve had the door company look at it,” Plaxico said Monday. “Insurance should cover it.”

The car wash, which sits across the street and about 50 yards from the fire department on Highway 76 in downtown Joanna, is far beyond repair. Chunks of the metal roof were blown behind the rest of the rubble and electric cables are still connected to the control panel on a still-standing common wall with an adjacent building.

Rubble from the Joanna carwash after the building was destroyed by a tornado Friday night.