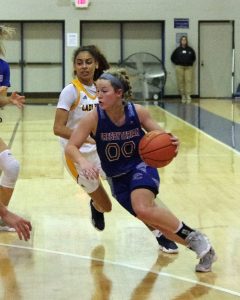 Kierscht, who leads the conference in 3-pointers made, went 4 of 12 from beyond the arc as the Blue Hose hit 12 of 31 overall. Senior center Bryanna Brady added 14 points, and freshman Christina Cline added 10 for PC.

The Blue Hose travel to Longwood at 2 p.m. Saturday. The game will be streamed on ESPN+.

Upstate guard Jordan Gainey’s steal led to a layup by Khydarius Smith to cut the PC lead to 60-59 with 2:34 to play. Gainey hit a layup to finally put the Spartans ahead 61-60 with 54 seconds left in the game.

PC missed its final four field-goal attempts in the game’s final seconds, including a layup at the buzzer by Trevon Reddish-Rhone.

The loss was the sixth straight for PC, and two of those have been by a single point.

Justin Bailey scored 16 off the bench to pace Upstate.

PC is set to host Longwood at 2 p.m. Saturday at Templeton Center.

At Chester, Clinton picked up a pair of Region 4-3A victories.

Clinton 46, Chester 26 (G): Clinton bounced back from a disappointing home loss to Woodruff with a 20-point barrage against the Cyclones (2-11, 0-4). Zakalia Redd led the Red Devils (11-5, 2-1) with 13 points. Malayja Thompson and Bryanna Belton scored 8 points apiece for Clinton.

Clinton is set to host Emerald in Region 4-3A action Friday.