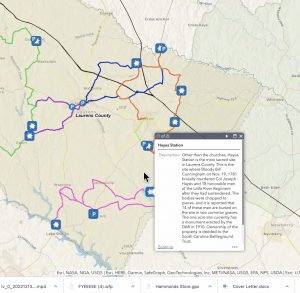 Jan. 28, bike ride from Clinton to Hammonds Store will help test an online mapping system for cyclists who also want to learn some history.

The project is being funded by an American Recovery Plan Act grant, distributed to The Laurens County Trails Association (LCTA) by Laurens County Council based on a proposal to get Laurens County residents outside and to learn more about the county’s significance in the Revolutionary War.
https://laurenstrails.maps.arcgis.com/apps/webappviewer/index.html?id=a1e68967565b4877b8ac8f834eaba25b
The Laurens County Cycling Club will welcome other bicycle riders to join them for a short 4.5 mile ride each way to Hammonds Store for a Revolutionary War lecture by Durant Ashmore.
It’s also, however, a way to test out the new mapping system and ask for feedback as it’s further developed.
“Justin Brent, Susan Johnson and Sandy Johnson have worked with a web designer to find the best possible and safest routes to follow,” said LCTA president Bud Marchant. 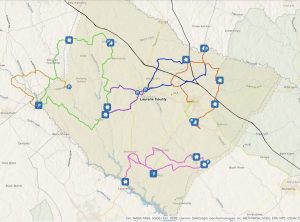 “Some of the routes are short and some are long, but they are designed to appeal to bikers who are interested in different types of rides. Additional features and information will be added to the site as things progress.”
Brent explained that while the online maps are still in the development stages, they already give some good history about the significance of the county during the Revolutionary War.
“The LCTA wanted to promote active forms of travel and show off the beauty of the county,” Brent said in Wednesday afternoon’s zoom meeting. “We have a few routes we have already developed and plan to do more.”
The map gives the name of the loops and in some cases, the distance. Some are long, such as one which is about 54 miles, but another from Clinton to Hammonds Store is about nine miles total, there and back.
For those who find the distances daunting, Brent said some could use the maps to drive tp the locations and see the Revolutionary War battle sites or consider using e-bikes.
“We want people to see it and look at it the map,” Brent said. “At some point we want this to become part of a larger site that can provide other content like car routes, but if people can begin to look at it then we can get some feedback on it and it will better guide what we are doing here.”
At 9 a.m. on Saturday morning, Jan. 28, cyclists will meet at The Depot in Downtown Clinton for a cycling trip to Hammonds Store where Historian Durant Ashmore will be giving a 10 a.m. lecture about the important events there.
“Durant had already set this up and we piggy backed on what he had scheduled,” said map co-creator Sandy Johnson.
“It’s a chance to test out the new map,” Brent said. “We can use it to blend recreation with learning more about our Revolutionary War history.”

As for Ashmore, he gives similar field trip lectures periodically, but this partnership is new for him.

“We decided to take advantage of this event and he likes the idea,” Marchant said. “He’s excited about cyclists using this tool and that cyclists will be coming to the lecture.”

The Hammonds Store location is 1503 Green Plain Road, Clinton, and its location was unknown until recently.

It was discovered in February 2022 by the Field Research Team with the South Carolina Battlefield Trust using advanced technology in battlefield detection, Ashmore said. It is just a few miles from Clinton and the battle involved hundreds of men fighting on both the Loyalist and Patriot sides.

“I will be presenting the results of this find, plus shed new light on the events of this battle which occurred 18 days before Cowpens,” Ashmore added. “What happened at Hammond’s Old Store had a profound effect on the Cowpens battle.”

Anyone is welcome to the outdoor program. For more information on regular activities of The Laurens County Cycling Club, call 864-923-6023.