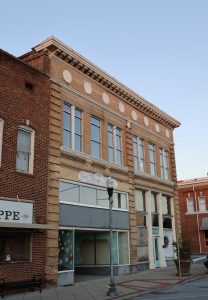 downtown Clinton has a better chance of survival after the Clinton Economic Development Building on Monday purchased the building at the corner of South Broad and West Main.
“We have heard it was formerly McGee’s Drug Store, and then it was other businesses but it has been empty for many years,” said Clinton City Manager Tom Brooks, who serves as treasurer of the CEDC.
Over the years the building has fallen into disrepair, Brooks said, and the CEDC, the economic development arm of the city, was concerned it would be lost if something wasn’t done quickly.
A building of this size and age with its needed repairs can be daunting even for developers to take on, and that’s why the CEDC is working to get it shored up before it would go on the market.

“Municipalites have access to federal and state historical grants that private owners don’t have access to, so we are applying for some of those in January,” Brooks said. “We will be able to use those funds to stabilize the building and we’re talking to developers who are interested.” 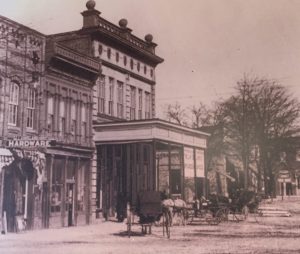 While Brooks has not yet been able to determine the age of the building, Grace Abernathy, a Clinton native and historic preservation specialist, said Sanford Insurance maps show it may have been constructed between 1894 and 1901, since the earlier map had a smaller, one story building in the same spot, replaced by the larger structure by 1901.

Details can be gathered later, Brooks said, but in the meantime the CEDC is happy to have the opportunity to save the building from continued disrepair. Hopefully, he said,  it will eventually have a new life within the Clinton downtown.
“I hate to see great old buildings lost,” Brooks said, adding that its location at an anchor point of downtown make it even more important.
The requested grant funding, if received, might enable the city to shore up other nearby buildings as well, Brooks said.
“That way maybe we can restore and save some of our most iconic buildings in our city,” Brooks told council Monday night after the contract was signed. “It will be a very exciting project if we can get the grant funds and the staff has already been working on that.”

This story first ran on Page 1 in the Wednesday, Jan. 11 issue of The Laurens County Advertiser.