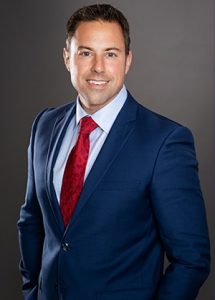 Presbyterian College will begin the search for the 20th president in its history following Wednesday’s announcement that current president Matthew vandenBerg has resigned to take the same post at Ohio Wesleyan University.

vandenBerg, who was hired by PC in November of 2020 and arrived in February of 2021, will remain at PC through the end of the fiscal year on June 30.

In a letter to the students, faculty and staff, Dr. vandenBerg thanked and commended the PC community for their hospitality, warmth, partnership and friendship during his tenure.

“As I have said many times, PC’s ‘secret sauce’ is its people. I am confident that PC will continue to flourish because of you,” he wrote. “I have never been more optimistic about the college’s future and am confident that PC’s best days are ahead.”

vandenBerg and his wife, Melissa, are from the Midwest and seek to reunite his family closer to extended family.

“This decision is in no way a reflection of my views of Presbyterian College or its students, faculty, staff, alumni or board. On the contrary, Melissa, Jackson, Sylvia and I have developed a tremendous love, respect and appreciation for Presbyterian College and its phenomenal people,” vandenBerg said.

Here is a link to vandenBerg’s letter.

Ruth Roper, chair of the Presbyterian College Board of Trustees, expressed gratitude for vandenBerg’s service to PC and wished their family well in their new endeavors.

“On behalf of the trustees, I am grateful for his energy, enthusiasm and many contributions in moving PC forward,” said Roper. “We wish Matt, Melissa and their family much happiness and success as they move to this new phase of their lives.”

Here is a link to Roper’s letter to the PC community.

During his short tenure at PC, vandenBerg worked to raise the college’s profile nationally, internationally and locally, creating a partnership with the City of Laurens and expandeing into Laurens for the first time with the purchase of the Capitol Theatre. The Capitol, which is scheduled to reopen this spring, will be home to PC’s e-sports team, a cafe and a theater that will host movies and live performances.

In Clinton, the school recently opened a small business incubator.

vandenBerg and a contingent from PC recently returned from South Korea where they created partnerships with South Korean secondary schools and a major university.

CarterBaldwin Executive Search will lead the search for the 20th president of Presbyterian College. Brad Bryant ’75, a board member since 2016, has been named chair of the search committee. Members of the committee and other details will be announced in the coming weeks.