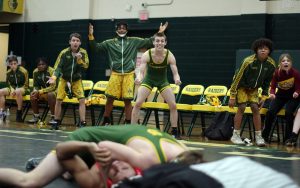 The rather lengthy book in the Laurens-Clinton high school rivalry added another chapter Monday night as the Red Devils and Raiders met for the first time on the wrestling mat.

LDHS defeated Clinton 39-32 in the first dual match between the two programs.

Clinton’s wrestling program is in its first season of existence, but pushed the Raiders to the edge. The Red Devils trailed 27-26 after Clinton’s Ares Jones scored a minor fall 8-0 over Michael Brown at 285 pounds, but were forced to forfeit the final two matches due to no competitors in the 113- and 120-pound divisions. The match also began with a Red Devil forfeit at 126 pounds to the Raiders’ Lindsey Simmons, who scored the first points and picked up the first victory in the match. 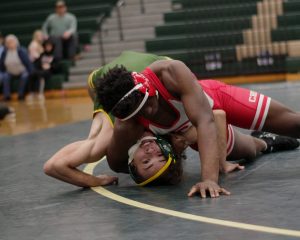 It always hurts to forfeit in three divisions,” said Clinton head coach Andrew Wright. “There’s no guarantee you’re going to win them, but you want to have somebody out there.”

The Red Devils have been without wrestlers in those divisions all season. The Raiders forfeited once at 195 pounds.

Despite starting and ending with forfeits, LDHS head coach Joe Adams breathed a sigh of relief after the match as the Raiders picked up their third duals victory in what has been a challenging season.

While Wright downplayed the rivalry because Clinton’s official wrestling history dates back to November, saying it was “fun for the kids,” Adams said he believes the match was the start of something bigger for both programs.

“Hopefully, we’ll be able to continue the momentum after the first win,” Adams said. “This matchup is going to be pretty crazy of the next couple of years. I think these matches are always going to be close. Rivalries tend to do that.”

Adams also believes Clinton’s new wrestling program couple with men’s and women’s teams at Presbyterian College as well as the Raiders’ established program that now includes three female wrestlers who will compete in an individual state tournament in February, will help the sport grow in the area.

“It’s going to grow exponentially,” he said. “When PC started its wrestling program, I think it really put the ball in Clinton’s court, so to see a cross-county rival and get some attention in the county, I think you’ll see more youth wrestlers. I think we’ll see our numbers boost in our youth program. . . . We’ll have kids competing in a young age, and I think you’ll see the sport grow exponentially in our county at the youth level and up.”

“We’ll see more and more kids on the mat, and hopefully you’ll see some of these young kids coming up on the mat soon as high school kids,” he said.