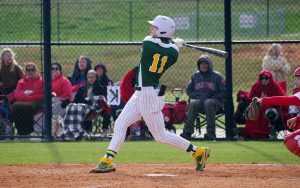 Martin, a right-handed pitcher and outfielder for the Raiders, is also nominated for Laurens County Touchdown Club Player of the Year for his play as a receiver, defensive back and punter on the football field this past season.

Former Raider Thomas Jones received a NCAA Division I offer from Vanderbilt, but joined the Miami Marlins organization after being drafted in the third round of Major League Baseball’s 2016 amateur draft.

Upon signing, Martin will become the first Raider to accept a Division I offer during high school since Dre Watts signed with the College of Charleston in 2009.

The list includes six offensive lineman, a defensive linemen, two linebackers and a running back. All but two of the 10 signees are transfers from two- or four-year colleges.

Here is a list of PC signees from Wednesday, Dec. 21:

Recruiting Notes: LDHS wide receiver Jay Pulley announced on Twitter that he has received an offer from PC, Pulley’s first announced NCAA Division I offer. . . . LDHS RB/LB Jordan Roberts recently announced an offer from Culver-Stockton College, an NAIA program in Canton, Missouri. . . . Mr. Football Finalist and South Florence QB LaNorris Sellers flipped his commitment Thursday from Syracuse to South Carolina. Sellers, who had been committed to the Orange since March, signed with the Gamecocks Thursday.