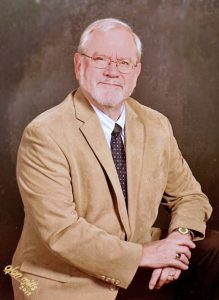 David Charles Needham entered the Church Triumphant on December 11, 2022 at the age of 86. He began his life in Plainfield, New Jersey on April 17, 1936, the eldest of four children born to Lt. Col. (Ret.) John A. Needham, Sr. and Alice Freeman Needham of Oak Tree, Edison Township, NJ. He was educated in the Middlesex County public schools, graduating in 1954 from Metuchen (NJ) High School. After high school, he enlisted in the U.S. Navy, serving on several destroyer-escorts in the Atlantic Fleet. In 1958 David received an honorable discharge from the Navy at the rank of Petty Officer Second Class. While in service, he met his future wife, Janice R. Hart, and after his military discharge they were married in Boynton Beach, FL on July 26, 1958. That fall he began his college education as a married student with a four-year educational grant from the GI Bill.

During the years 1962 to 1970, David earned an A.B. Degree from Hope College, Holland, Michigan; an M.A. from Ohio University in Athens, Ohio; and a Ph.D. from the University of Georgia. After this academic preparation, he entered a thirty-three year career teaching history at Presbyterian College in Clinton, S.C. In 1995, a significant event in his career was attending, with his wife Jan, a UC Berkeley program at Oxford University. Dr. Needham retired in May, 2000 with the title and rank of Charles A. Dana Professor of History, Emeritus. He is the author of several articles and entries in professional journals. Since his retirement, he has authored a brief history of his family’s church as well as a personal memoir of his life.

He was predeceased by both his parents, his sister, Sarah Needham Armster, and by Janice, his first wife of forty-three years, who died in 2001. He is survived by their three children, Karen Needham Bates, Michael David Needham (Leeann) and Amy Needham Allen (Joshua), and five grandchildren. David is survived by two siblings, the Rev. John Addison Needham, Jr. (June) and Henry Edward Needham. He is also survived by his second wife, Gail Ashe Needham, whom he married on January 3, 2004, and by her two children Ashely Gail Baldwin and Harry Eakins Baldwin Ill (Candice). In addition, he is survived by three grandchildren from his second marriage.

The Needham family loved to travel, especially spending their summer vacations at the seaside. While David had limited success as a bird hunter, he loved to walk the fields and see George Sease’s pointers at work. He played baseball in his youth and was a diehard fanatic who “loved” the Braves and “hated” the Yankees. However, without a doubt his favorite lifelong hobby was reading, especially historical novels.

David was a faithful member of Broad Street UMC, serving on numerous committees and activities that included: singing in the chancel choir, as church historian, writing and editing the newsletter, as a member of the Methodist men, and as a former lay delegate to SC Methodist annual conference. Through his church’s missions, he volunteered to repair local homes, served as a volunteer and board member at United Ministries of Clinton, and helped in a literacy campaign. For many years he was a volunteer at Hospice of Laurens County, and he enjoyed serving as a coach at the local YMCA’s T-Ball program. During his time with us, David influenced and guided countless lives through friendships, mentoring, and service.

His funeral service will be held at Broad Street United Methodist Church on Saturday, December 17th at 2pm. It will be preceded by visitation with the family beforehand in the sanctuary at 1 pm. A graveside service at Rosemont Cemetery follows immediately, where his remains will be interred beside his beloved wife, Janice. The choice of where memorials may be sent is left to the discretion of the donor/giver.

Gray Funeral Home of Clinton is assisting the Needham family with arrangements.