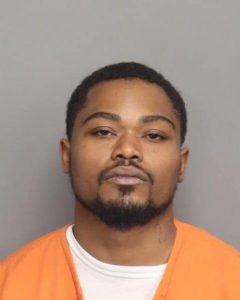 A man wanted by Laurens Police for an attempted murder was arrested by U.S. Marshals Thursday in Greenville.

Davoris Tanyata Smiley is charged with attempted murder and possession of a weapon during the commission of a violent crime in connection with a shooting incident that occurred in October in Laurens.
A release from the Laurens Police Department said its investigators and members of the U.S. Marshal’s Service Fugitive Task Force located Smiley in Greenville where he was arrested without incident.
Smiley was awaiting a bond hearing while being held Thursday afternoon at the Johnson Detention Center.
“I am proud of my detectives for their endless pursuit of this dangerous individual and grateful for the assistance of the U.S. Marshal’s Fugitive Task Force, said LPD Chief Keith Grounsell. “Working jointly with our federal partners means that nobody is beyond our reach and the strong arm of the law.”
Posted in Breaking News, News and tagged attempted murder, Davoris Smiley, Laurens Police Department, U.S. Marshal's Service Fugitive Task Force