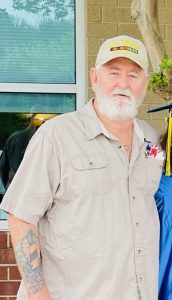 He was born December 5, 1949 in Clinton, SC and was a son of the late Louis William Butler, Jr., and the late Ruby Pressley Butler. Mr. Butler was a retired welder from BF Shaw, a US Army Veteran of Vietnam, he enjoyed the outdoors, hunting and fishing, and enjoyed playing youth baseball when he was young.

In addition to his parents Mr. Butler was preceded in death by his daughter, Freda Loree Butler; his brother, Wayne Butler; and sister-in-law, Carol Butler.

A Funeral Service with Military Honors will be conducted 2 PM, Friday, December 2, 2022 at the Gray Funeral Home Chapel of Clinton with Rev. Phil Bryson officiating. The family will receive friends prior to the service from 1 PM to 2 PM at the funeral home.

Memorials may be made to the Shriners Hospital, 905 West Faris Road, Greenville, SC 29605.

Gray Funeral Home of Clinton is assisting the family with services.