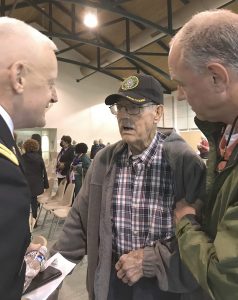 Clinton, South Carolina – Charles Nally was a young Army soldier in West Germany when he faced his most dangerous day of service completely by mistake.
The Clinton resident, now 88, was out with fellow soldiers in the early 1950s on a border patrol when a commander sent sharp orders to return.
“We’d gone into East German territory and we didn’t even know it,” Nally said, telling the potentially dangerous story to Brigadier General Robin B. Stilwell following the annual City of Clinton Veterans Day program.
Stilwell, director of the Joint Staff over the South Carolina Air and Army National Guard, was visiting Clinton to participate in the city’s annual Veterans Day program on Friday. Nally was among the numerous veterans who were present for the annual program at Broad Street United Methodist Church.
Dist. 42 Rep. Doug Gilliam, who retired after more than 26 years active duty as a Command Sgt. Major with the SC Army National Guard, presented accommodations of service and flags flown from the State Capitol building to three Clinton veterans – Costell Little Jr., Shelby Bruce and Andy Howard.
Gilliam also told accounts of each of the veterans’ service. 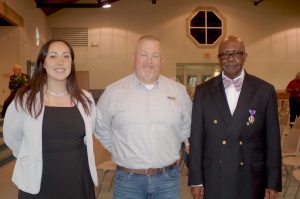 Little was drafted in November 1965 and assigned to the First Infantry Division, the Big Red One 1st Squadron 4th Calvary, and his battles included action on the road from An Loc to Minh Thanh Road in South Vietnam.
Little was seriously wounded and spent 26 days in a Saigon hospital. The day after he was released from the hospital, Little returned to active duty in the jungle and was injured by a land mine later that summer.
Little remained in active duty and went on to serve in the First Gulf War, earning numerous medals over his 20 years of active duty. They include the Purple Heart, and many others.
Little returned to Clinton to teach at Martha Dendy Elementary and Bell Street Middle School and was the first minority employed at the U.S. Post Office in Clinton. He also successfully negotiated for minority soldiers to be able to advance to a higher pay grade in the Clinton branch of the S.C. National Guard.

Shelby Bruce, the owner of Tipsy Gypsy consignment boutique in Clinton, entered Navy Boot Camp in 2010 and later served with a P-3 Squadron in Pensacola, Florida, then at NAS Whidbey Island, Washington. She then served in Misawa, Japan for five months until she was sent home for required heart surgery with an honorable discharge, having been awarded several medals during her service.
The Bruce family sought a small town environment to raise their daughter and moved to Clinton in October 2020.

From 1996 to 2004 Clinton native Andy Howard was on active duty with the U.S. Marine Corps, serving on the 22nd Marine Expeditionary Unit and the 26 Marine Expeditionary Unit. He was a member of the 2nd Low Altitude Air Defense Battalion at Cherry Point, North Carolina. Most of his time, however, was spent on various peacekeeping missions and he was in Greece on Sept. 11, 2001, when his unit was deployed to respond to the attacks on America.
Following that time, Howard served as a Marine Corps Recruiter in Columbia and Spartanburg before receiving an honorable discharge at the rank of Sergeant and having received several medals during his service.
Howard holds a BS degree in Parks and Recreation with an emphasis on Tourism and serves as the director of Laurens County Parks and Recreation.

“Service in our military is a calling,” said Clinton Mayor Bob McLean, “and Costell, Shelby and Andy answered that call.”

This story originally ran on Page 1 of the Wednesday, Nov. 16 issue of The Laurens County Advertiser.