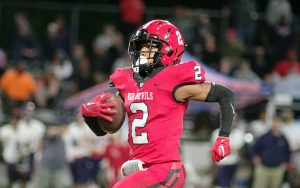 He found the senior receiver/safety/kick returner and hugged him.

That wasn’t hyperbole. Copeland touched the ball four times on offense and special teams and scored on three of them.

Copeland scored three touchdowns – a 95-yard kickoff return, a 75-yard reception and a 55-yard run with 8 minutes, 10 seconds to play that effectively put the game away and propelled Clinton into the third round of the Class 3A playoffs. The Red Devils will host former Region 3-3A foe Chapman Friday night at Wilder Stadium. The Panthers defeated Seneca 57-29 in their second-round playoff contest. 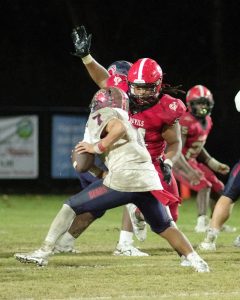 But getting through No. 6-ranked BHP was hardly easy for the No. 3-ranked Red Devils, who trailed for the first time this season after BHP quarterback A.J. Pendleton hit Eli Strickland on a 73-yard pass with 4:41 left in the first quarter to give the Bears a 7-0 lead.

The advantage was short-lived, though. Copeland answered immediately with a 95-yard kickoff return to tie the game at 7-7 with 4:27 left in the opening quarter.

“It was huge to get that bounce back, to get the breath back because it sounded like on the sideline that we got the wind knocked out of us a little bit,” Fountain said of Copeland’s kickoff return. “But our guys were able to bounce back, and we were able to get some defensive stops.”

Those two explosive plays set the tone for the game. All six touchdowns scored on the night came from at least 36 yards out.

Clinton running back Jayden Robinson added a 47-yard touchdown run with 11:10 left in the second quarter on the Red Devils’ next possession. That score was followed by Copeland’s 75-yard touchdown reception from Young with 7:21 left in the first half, giving Clinton a 21-7 lead.

If the game belonged to the Red Devils and Copeland, who added a couple of key pass break ups from his safety position, the second half belonged to the Clinton defensive unit.

Following a short punt in the third quarter that gave the Bears the ball near midfield and a fumbled snap in the fourth quarter, the Red Devils forced BHP to turn the ball over on downs twice, thwarting BHP’s best chances to cut Clinton’s margin in the second half. The Bears were 0-for-4 on fourth down for the game.

“We played as a team on auto drive,” said senior defensive lineman Hezekiah Kinard. “All my brothers were with me on every stop.”

The Red Devils averaged nearly 50 points per game during the regular season and in the first round of the playoffs, so relying on defensive stops was something new for Clinton.

“Our defense played a great game,” Fountain said. “We just got after it all night, and we told (our players) that at the beginning of the game. It was two heavyweights going at it all night, throwing blows at each other, and our guys came out on top. I’m just really proud of them and really proud of our coaches.”

With rival Chapman awaiting in Round 3, the immediate future seems familiar for the Red Devils.