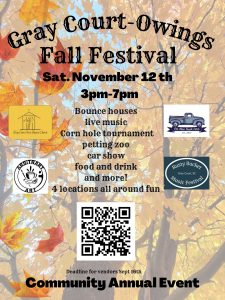 The inaugural Gray Court-Owings Fall Festival set for this Saturday from 3-7 p.m. will feature the usual trappings of community fests – music, vendors, food and fun.

All four locations are no more than a mile from one another and organizer Brianna Johnson said each one offers a little something different.

“It’s one main event, but in four locations,” Johnson said. “Each has it’s own highlights, but there is something everyone can enjoy at all of them.”

Vendors, food and fun for children, including bounce houses, are set for all four locations.

The main event is a concert by BJUgrass, the Bob Jones University Bluegrass Band, at 6 p.m. on Main Street in Gray Court.

Here is a list of activities at all four sites:

“It’s a big ol’ festival,” Johnson said. “Everybody should be able to find something they enjoy doing.”

Johnson also said more than 70 vendors have signed up to participate at the festival.

“It’ll be a great chance for people to come out and find Christmas gifts,” she said. “I think it’ll be a lot of fun.”

Johnson also helped organize this past summer’s Rusty Bucket Music Festival and said people within the community immediately chimed in that they would like to see a fall festival on the calendar.

“So, we all came together to work on this festival,” she said. “As long as people want it and as long as they show up for it, we will continue to do it.”