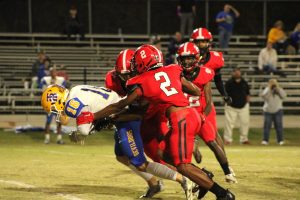 Clinton handed its playoff business much the same as it did during a perfect regular season, defeating Travelers Rest 49-14 Friday night at Wilder Stadium in the first round of the Class 3A state playoffs.

South Carolina Mr. Football finalist Bryson James ran for 142 yards and two touchdowns on just five carries. James scored on runs of 37 and and 78 yards in the first quarter as the Red Devils exploded for a 42-0 lead in the first 17 minutes of game time.

Jayden Robinson and Jishun Copeland each also added a pair of touchdowns. Robinson scored on first-half runs of 41 and 3 yards, and Copeland had a 1-yard touchdown plunge to go with a 56-yard touchdown reception from Bryce Young, who completed 1 of 2 pass attempts on the night.

The Red Devils finished with 392 rushing yards on the night, while the Clinton defense limited the Devil Dogs to 2 of 11 (18%) on third down conversion attempts. The Red Devils also forced two Travelers Rest fumbles.