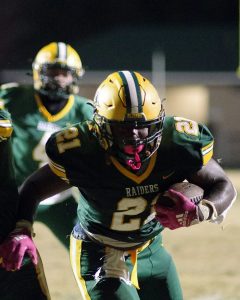 The Raiders, who had everything fall into place for a share of the Region 2-4A title and the conference’s No. 1 seed in the Class 4A playoffs as they sat idle a week ago, stumbled in the opening round of the playoffs.

Indian Land, the No. 4 seed from Region 4-4A, scored 28 unanswered points in the second half and left K.C. Hanna Stadium with a a 41-20 victory Friday night.

The loss ends Laurens’ season at 4-7. Indian Land will travel to Westside for next week’s second round. The Rams defeated Midland Valley 45-35.

Indian Land (7-4) rolled up 379 yards rushing, averaging 6.5 yards per carry and getting large chunks of yardage after taking the lead in the second half.

Running back Jaden Singletary did most of the damage for the Warriors, gaining 265 yards on the ground and scored two touchdowns. Quarterback Jaxson Scheidt added another 65 yards rushing and a touchdown before leaving with an injury in the second half. Scheidt’s backup, Myles Stinson ran for another 29 yards and a touchdown.

The Raiders took a 14-13 lead with 1:56 left in the first half on senior Gemire Darden’s 4-yard run. Darden found running room often, finishing with a team-high 90 yards on 14 carries.

In the first quarter, quarterback Nick Fowler hit senior wideout Cayson Elledge, a Davidson commit, for a 7-yard touchdown to give the Raiders a 7-0 lead with 3:16 left. The Raiders were unable to score again until Javaye Suber’s 6-yard touchdown run with 1:37 left in the game.

Fowler connected on 15 of 27 passes for 138 yards and the score. Ellege had four catches for 40 yards and senior Jay Pulley five catches for 33 yards. 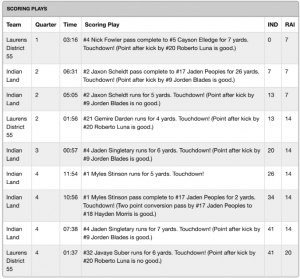