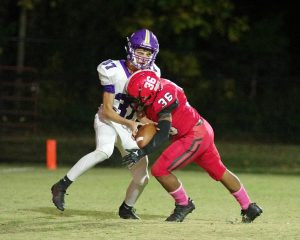 Clinton punctuated the final chapter in its perfect region championship season Friday night with a 37-6 victory over Emerald at Wilder Stadium.

The Red Devils (10-0 overall, 4-0 Region 4-3A) clinched their first region championship since 2007 last week with a win over Chester, so the only trophy to claim against Emerald was an unbeaten regular season.

But Clinton head coach Corey Fountain immediately reminded his players that they had “unfinished business” as the state playoffs begin next week. The Red Devils are ranked No. 3 in Class 3A behind No. 1 Daniel and No. 2 Dillon. Daniel eliminated Clinton last season in the third round of the playoffs.

The visiting Vikings learned firsthand what nine previous Clinton opponents have this season – the Red Devils can beat you in a variety of ways.

This week it was special teams.

Emerald’s defense kept Clinton’s normally potent rushing attack mostly in check, denying the Red Devils the explosive plays that have become the norm under Fountain, but Clinton still managed a 21-0 lead by the end of the first quarter thanks to a blocked punt returned for a touchdown and a botched punt that led to another one.

After the Red Devils defense stopped the Vikings on the initial drive of the game, Kadon Crawford blocked a Wade King punt and Jishun Copeland scooped it up and returned it 21 yards to give Clinton a 7-0 lead with 10:13 left in the first quarter.

That was the beginning of a long night for King, who failed to get a punt off in three attempts. On Emerald’s next punt attempt, King mishandled the snap and Bryson James made the stop to set up a score. Copeland scored from 7 yards out to cap a four-play, 18-yard drive to put the Red Devils up 21-0 with 2:53 left in the opening quarter.

With the game all but decided, King mishandled a snap in the end zone and was tackled there by Kason Copeland for a safety with 7:27 left in the third quarter to put the Red Devils ahead 30-6.

Emerald’s lone score came just before the end of the first half on a 5-yard pass from Key Holloway to Ean Ryans that cut the Clinton lead to 21-6.

“Special teams is what I’m really proud of,” Fountain said. “Coach (Peyton) Spangler had’em smelling blood in the water. We were going after those punts, and we did a great job.”

Bryson James, who was named a finalist for South Carolina Mr. Football earlier this week, scored the first of his two rushing touchdowns on a 2-yard run with 3:40 left in the first quarter. James added a 1-yard run for Clinton’s final score of the game with 3:24 left in the game.

Emerald outgained Clinton in yards from scrimmage 222-217, but the special teams miscues proved to be the difference.

James was held to a team-high 65 yards on the ground. Justin Copeland, who scored on a 15-yard reception from Bryce Young with 7:27 left in the third quarter, had 3 catches for 56 yards. Young completed 5 of 6 passes for 62 yards.

The Red Devils will host Travelers Rest as the Class 3A state playoffs begin next week. The Devil Dogs (4-6) lost to Blue Ridge 49-48 Friday night to fall into the No. 4 spot in Region 3.