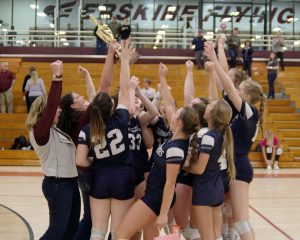 Head coach Shannon McGee raises the trophy to celebrate with her Laurens Academy team, which won the SCISA Class 1A state championship Monday at Erskine College.

DUE WEST – Laurens Academy weathered an early onslaught from Cambridge Academy and defeated the Cougars 3-1 (15-25, 25-20, 27-25, 25-21) to claim the SCISA Class 1A state volleyball championship Monday night at Erskine College.

The Crusaders defeated Cambridge in all five meetings between the two teams this past season, including twice with championships on the line. LA downed the Cougars a week ago for the SCISA Region 1-1A crown before winning the program’s first state volleyball championship since 2004.

“We’ve been working toward this for seven years,” said LA head coach Shannon McGee. “Every year our team has gotten a little bit further and a little bit further. Last year, we thought we would be here but we just didn’t make it. This year, we made it, and we finished really strong.”

After dropping the first set 15-25 in front of a large, raucous crowd at Erskine’s Belk Arena, LA rebounded for a 25-20 victory in the second set, setting the tone early and leading most of the way.

The pivotal third set ended with a late rally by the Crusaders, who faced set point at 22-24 before battling back to tie the game at 24-24. Senior Olivia Huck served out the set with a pair of service points for the 27-25 win that gave LA the momentum it needed heading into the fourth and final set.

LA pulled away twice late in the fourth set, but the Cougars battled back each time, cutting the lead finally to 23-19 before LA (35-4) put the match away.

Junior Madison Sherman, the Region 1 Player of the Year, forced a Cambridge error from the net for match point.

“It was relief,” Sherman said. “I felt like I hadn’t been playing well the whole time. Just having that last point really reassured me a lot.”