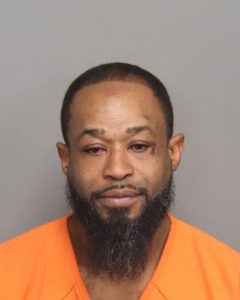 A Laurens Police officer was injured in a collision around 9 o’clock Wednesday night during a vehicle chase that began outside the Laurens city limits.

The officer was taken to Prisma Laurens County Memorial Hospital for treatment and evaluation.

According to a release from the LPD, officers were assisting deputies from the Laurens County Sheriff’s Office, who began pursuit of a suspect outside the city limits, when the collision occurred on South Harper Street.

The chase began on I-385 South when a deputy on patrol observed a vehicle driving erratically.

The suspect, Robert Darnell Martin Jr., was apprehended a short time later on South Harper Street Extension without further incident and booked into the Johnson Detention Center. Martin was initially charged with driving under the influence.

After Martin was taken into custody, a juvenile was discovered in the vehicle. According to the LCSO, Martin said he had been drinking. Marijuana along with several open beer cans and an open liquor bottle were also found in the vehicle, the LCSO said.

In addition to the DUI charge, Martin has been charged with Driving Under Suspension (License Suspended for DUI) 2nd Offense, Failure to Stop for Blue Lights, Unlawful Conduct Toward a Child, Simple Possession of Marijuana, Open Container and Transport of Liquor with Broken Seal.

The injured officer was admitted to the hospital with non life-threatening injuries and stayed there overnight for observation.

This story will be updated as more information becomes available.