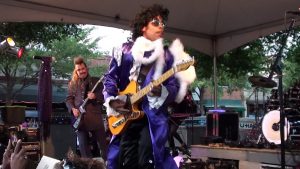 Clinton, South Carolina – Rhythm on the Rails returns this weekend to Clinton, and among the highlights is the Purple Masquerade Tribute Band.
“It’s one of those situations where he looks like Prince and he sounds like Prince,” said Main Street Clinton manager Joe Timmons. “When he performed in Lancaster once, I think some of the audience might have thought Prince was alive after all.”

The Purple Masquerade Tribute Band will be the headliner and the final musical group in what is planned as a full day of festival food, amusement rides and music. 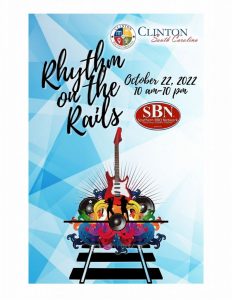 “We really have two festivals going on simultaneously. ‘Smokin’ on the Rails’ is the Southern BBQ Network competition, and they will arrive Friday night and begin cooking and compete Saturday, and the winner will be announced Saturday at 2 p.m.,” Timmons said. “Then Rhythm on the Rails is a one-day festival which begins at 10 a.m. Saturday and ends at 10 Saturday night.”
Several of the barbecue teams will be serving as vendors as well, and that includes Friday.
“So you can actually come down Friday evening and get some barbecue,” Timmons said.
Tables, chairs and tents will be set up, as well as the beer garden area near the stage. 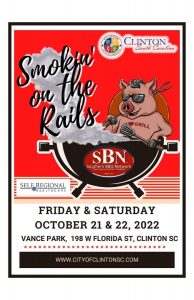 businesses in the city, and Laurens County also helped,” Timmons said. “You can ride as often as you want.”

Vendors will be located up South Broad Street and the Laurens County Cruisers will park in front of the old Industrial Supply buildings.

Rides and vendors begin Saturday at 10 a.m. and the music begins at noon, starting with ’70’s to ’90s rock band, DÅZR, and followed at 3 p.m. by Wild Blue Yonder, a Celtic Appalachian band out of North Carolina.

The Phazar Band, a favorite summer concert series band, will perform at 5:45, and then Purple Masquerade begins at 8 p.m.
“We’ll also be promoting our other events,” Timmons said, “including the Zombie Walk which starts at 6 p.m. Friday night, Oct. 28, at Vance Park and goes throughout the downtown.”