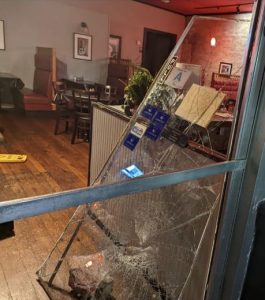 The front door at Roma Restaurant in Laurens was smashed during a robbery early Sunday morning.

Laurens Police are searching for a suspect who broke into a popular downtown Laurens eatery sometime after the annual Squealing on the Square festival ended Sunday morning.

According to police, the break-in at Roma Restaurant on the Laurens Historic Square between 1 a.m. and 4 a.m.

Investigators are currently reviewing security camera footage from the restaurant and other businesses around the square. They said the restaurant’s alarm system did not initially activate when the intruder entered.

The suspect is described as a slender-built male who was possibly wearing glasses. He entered the restaurant by breaking through the glass front door and “went straight for the money box.”

LPD Public Information Officer Scott Franklin said the suspect left the scene with with a cash box and an unspecified amount of money several hours after Squealing on the Square ended around 10 p.m. Saturday.

Franklin said anyone in the downtown area with any type of security footage or who may have witnessed anything pertinent to the case, can contact the LPD at 864-984-3531 or may make an anonymous report through CrimeStoppers (864-68-CRIME).

Roma owners Yvan and Jennifer Youssef announced in a Facebook post with a photo of the restaurant’s broken front door that the restaurant would be closed Sunday. It reopened Monday with at least one of its business neighbors planning to help.

Palmetto Brothers Dispensary announced plans for a Roma pizza-eating contest on Oct. 22 with all proceeds going to Roma. For a $25 entry fee, contestants will receive a large Roma pizza and a pint of beer and the chance to  challenge Palmetto Brothers owner Wes Meetze to in the contest.

Anyone who finishes their large pizza before Meetze will receive a $25 gift card to Palmetto Brothers and the first to finish will also receive a $50 gift card to Roma. The contest is limited to the first 25 people who enter.