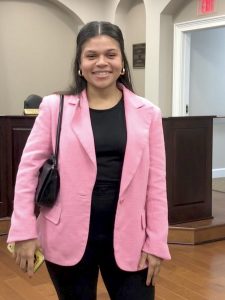 Clinton, S.C.  – At its regular Monday night council meeting last week, the City of Clinton got an invitation from a student-led Presbyterian College group which hopes to partner with the city to help it reach its economic potential.
“I have been working on a campaign called Project Expand,” said PC sophomore Barrett Moody. “Project Expand is meant to bring a connection between the community, students and businesses in order to implement change and growth within the downtown streets of Clinton.”
Moody, a business management major from Travelers Rest, said she thinks PC students can assist through volunteer efforts in ways that can bring real economic benefits to the city.
“In the beginning phase of Project Expand, for feedback I hosted a brainstorming session called the Thinkcubator,” Moody said. “In this session students leaders from all backgrounds and local businesses devised ideas to revamp the downtown streets. From the Thinkcubator it’s clear people would like more crowding, restaurants and entertainment downtown.”

Moody saw her own hometown of Travelers Rest go from a tiny community to a destination point, and she thinks Clinton has that same potential.
A project she hopes to see unify the college and the city is a mural, with ideas drawn from the city and the painting done by student volunteers from the PC art department.
“The Art Department is already on board,” Moody said. “We would just need permission to use one of the main walls of the city.”
Moody said the students also said they’d like to help with the city’s Halloween Zombie Walk, any upcoming cleanup day and the city’s Christmas tree lighting ceremony.
In other business, council agreed unanimously to authorize the Department of Utilities to award a contract for the construction of the Stone Creek Pump Station and rehab of the Florida Street Pump Station, force water mains and other needs related to the city’s infrastructure.
These pump stations are crucial for the planned subdivisions in various sections of the city.
Following executive session, council agreed to do some renovation work on a small home near the planned recreation complex and allow City Manager Tom Brooks to live there instead of providing a city car for Brooks’ use.

This story first ran on Page 1 of the Oct. 5 issue of The Laurens County Advertiser.