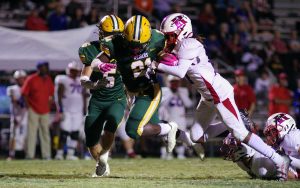 Laurens RB Gemire Darden (21) gains yardage during the second half of the Raiders’ 17-14 homecoming loss to Riverside Friday night at K.C. Hanna Stadium.

Little more than a week removed from its most stirring victory of the season, Laurens suffered an equally heartbreaking defeat on homecoming night at K.C. Hanna Stadium.

Riverside overcame a 14-point deficit with three fourth-quarter scores to escape with a 17-14 Region 2-4A victory Friday night, putting the Warriors in the driver’s seat for the region crown.

A last-ditch Laurens drive stalled at the Riverside 36, and the Warriors were able to take one final snap on offense to claim the victory.

Laurens quarterback Nick Fowler threw a pair of touchdown passes – a 6-yard strike to Jay Pulley with 4:37 left in the second quarter to put the Raiders ahead 7-0. Fowler found Cayson Elledge in the end zone from 9 yards out to extend the Laurens lead to 14-0 with 8:44 left in the third quarter.

Clay Black picked off a Fowler pass at midfield and returned it to the Laurens 36 with 4:15 left in the game, setting up Riverside’s game-winning field goal. Fowler completed 13 of 21 passes for 103 yards with the two touchdowns and the interception.

The Raiders fell to 2-6 overall and 1-1 in Region 2-4A and travel to Wade Hampton next Friday night.

While Laurens’ hopes for a region championship took a hit with the loss to the Warriors, the Raiders still have hope for at least a share of the title. They will need Greer or Eastside to defeat Riverside and will have to not victories over Eastside and Wade Hampton over the next two weeks.