Laurens , S.C. – For the first time in its 21 years, Squealin’ on the Square was postponed a week, and Main Street Director 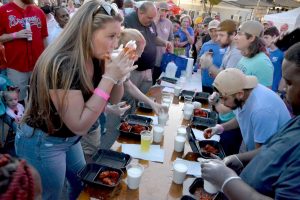 Jonathan Irick has been pleasantly surprised at how much this weekend’s festival will come off almost exactly as it had originally been planned, and everything starts this afternoon.

“We still will have plenty of barbecue,” Irick said. “We have five barbecue vendors coming Friday and Saturday, and we will still have the People’s Choice contest Friday night, with four of the vendors participating with samples of pulled pork.”

And there’s still the same number of bands Friday and Saturday, and because it was a week later, The Band Levelz with David E was able to come headline tonight, Friday, from 8 to 10 p.m. 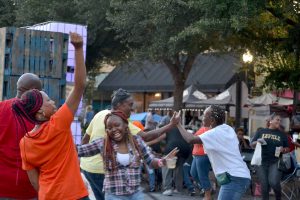 “We’d wanted them last week but they had a conflict, so we were glad to get them tonight,” Irick said. “David lives in Laurens and they are very popular and always bring a good crowd.”

Caroline’s Roost, whose lead singer is from Clinton, plays Friday evening from 5 to 7 p.m.
“We have a strong local connection with our bands here which is really cool,” Irick said. “On Saturday, Vance Kennedy and Barksdale Station is local and Rhythm Section, a bluegrass band, has a member from Hickory Tavern.”
The Song Band has been here before and engages the audience really well with its energetic performance, Irick said. It closes out the festival with a street dance Saturday night from 6 to 10 p.m.
“We still have our craft vendors and food, 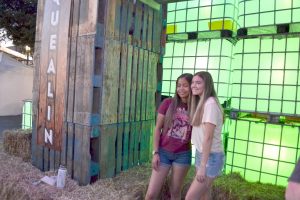 so the main loss with the postponement of the festival is the barbecue competition, which is unfortunate because it brings so many people from out of state,” Irick said, “but the competition typically doesn’t impact festivalgoers. We will still have the pickle-eating contest Saturday at 11:30, Zaxby’s hot wings are still on Saturday afternoon and we’ll still have the hog calling contest.

The children’s amusement rides also had to cancel, Irick said.
But Down on the Farm will be Saturday morning on the grassy area behind United Community Bank. 4-Hers will have a petting zoo and bunny and dog contests.

Festival organizers had already decided to keep Laurens Street open for pedestrians. With less congestion because of fewer vendors, the entire street will be available for people to bring their lawn chairs to enjoy the music and the food.