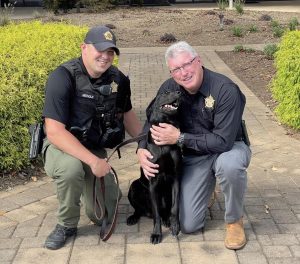 The Laurens County Sheriff’s Office has added a new deputy to the force, and he’s the best boy.

K9 Deputy Abel, a firearm detection dog, is on duty with the LCSO and is paired with Deputy Cody Heithold, the School Resource Officer at Laurens District High School.

The LCSO announced last year its intention to acquire a firearm detection dog to help sniff out firearms or explosive devices in schools or wherever needed.

“Abel is a valuable and cherished addition to our office,” said Laurens County Sheriff Don Reynolds. “He is another tool to keep our students safe and I look forward to his service alongside us.”

According to the LCSO, Heithold, who joined the office in June, underwent special training to work specifically with Abel.

Laurens County School District 55 partnered with the LCSO to bring in Abel, a Black Labrador Retriever in an effort to increase school safety.

LDHS has had two reported threats of guns being brought on campus over the past week. Both threats, which originated on social media, were investigated by the LCSO and no weapons were found on campus.

The students who originated both threats, however, were disciplined. One was remanded to the S.C. Department of Juvenile Justice.

K9 Abel joins a group of four other patrol K9 deputies and four bloodhounds on the LCSO roster.

The LCSO is holding a fundraiser at Tractor Supply in Laurens on Saturday, Oct. 15 from 10 a.m.-2 p.m. to help offset expenses of incurred by the K9 and bloodhound units.

Money raised from the even will go to purchase necessary supplies, dog food, protective gear, veterinary expenses and training costs.