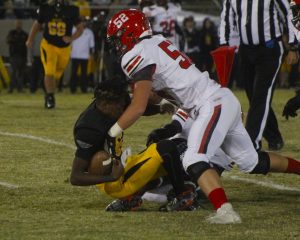 Clinton opened its Region 4-3A schedule at Union County Thursday – a day earlier than planned due to Hurricane Ian’s impending impact on the Upstate.

After the Red Devils left Union County Stadium with a 61-7 victory, the Yellowjackets may have preferred to tangle with the hurricane.

Bryson James scored the first of his three touchdowns on a 32-yard run with 9 minutes, 42 seconds left in the first quarter, bursting the dam for the Clinton offense. Clinton erupted for 35 first-quarter points.

After four straight weeks of special teams returns for touchdowns, the Red Devils doubled up against Union County. Bryson James, who also scored on a 5-yard run in the second quarter, returned the second-half kickoff 90 yards for a touchdown – his fourth kickoff return for a score this season. Brett Young recovered a blocked punt in the end zone for a score during the Red Devils’ outburst in the opening quarter.

James and Jishun Copeland each rushed for 70 yards on five carries to lead the Red Devils (7-0 overall, 1-0 region) on the ground, while quarterback Austin Copeland scored on a 3-yard touchdown run and completed his only pass for a score – a 22-yard strike to Kaden Crawford.

The Red Devils have a bye week scheduled for this coming week, but will return to region play on Oct. 14 against Woodruff at Wilder Stadium.