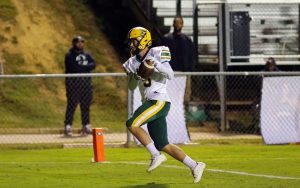 Laurens WR Cayson Elledge (5) scores the game-tying touchdown on a 29-yard catch from Nick Fowler in the fourth quarter.

GREER – Laurens overcame a 10-point deficit in the second half and senior kicker Roberto Luna kicked a 25-yard field goal with 15 seconds remaining to lift the Raiders to a 20-17 victory over Greer at Dooley Field.

Luna’s kick gave the Raiders their only lead of the game and delivered a victory in their Region 2-4A opener.

Greer (1-6 overall, 0-1 Region 2-4A) built a 10-0 lead by halftime, but Laurens, playing its second game with former backup quarterback Nick Foster at the helm, cut into the lead to 10-7 with a 13-yard touchdown run from Jordan Roberts.

Greer running back LaDainnian Martin, who ran for 205 yards on the night, added his second touchdown run of the game with 10:37 to play, putting the Yellow Jackets up 17-7.

But Laurens found the big plays that had eluded them for most of the season over the next 10 minutes of game time.

Linebacker Noah Mosley forced a Kaden Rowland fumble on a quarterback sack that led to the first of Luna’s two second-half field goals, a 27-yarder with 8:16 left in the game that cut Greer’s lead to 17-10.

A defensive stop on the Yellow Jackets’ next possession and a trick play on offense set up a Cayson Elledge touchdown reception that tied the game at 17-17 with 4:40 left in the game. Wideout Jaedon Goodwin connected with Elledge on a 26-yard reception to set up a 29-yard scoring strike from Fowler, who found Elledge alone at the goal line. The touchdown catch tied the game at 17-17 with 4:40 to play.

After another stop by the Raiders’ defense and a Greer punt, Goodwin was on the receiving in of a 42-yard pass from Fowler in the final minute of the game that set up Luna’s game-winning  kick. It was Goodwin’s only catch of the game.

Fowler completed 7 of 16 passes for 90 yards. Elledge, a Davidson commit, led the Raiders in rushing with 6 carries for 42 yards coming on end-arounds and jet sweeps, and receiving with 3 catches for 65 yards. 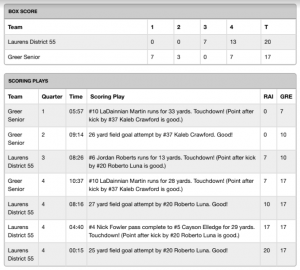