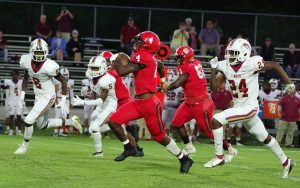 Clinton’s Keividrick Richardson (4) breaks away from South Aiken defenders for a 59-yard TD run on the first play from scrimmage Friday night during the Red Devils’ 54-28 win at Wilder Stadium.

Clinton’s Keividrick Richardson started the game by bursting up the middle for a 59-yard touchdown run on the first play from scrimmage that proved to be more than just a score. It was a hint of things to come.

The  unbeaten Red Devils, ranked No. 3 in Class 3A, outran and outscored visiting South Aiken 54-28 Friday night at Wilder Stadium.

Clinton (6-0) and the Thoroughbreds combined for 874 rushing yards and 12 touchdowns, but the Red Devils scored eight of them, starting with Richardson’s long run that turned out to be the first of many on the night.

Of the 12 touchdowns scored in the game, 11 of them came from at least 32 yards out.

South Aiken quarterback Terrence Smith, the Thoroughbreds’ leading rusher on the season, answered Clinton’s initial score with a 63-yard run to tie the game at 7-7 with 2 minutes, 12 seconds left in the first quarter.

The Red Devils followed that up with four straight scores – runs of 37 and 63 yards from Bryson James, a 65-yard run from Jayden Robinson and a 52-yard punt return from Justin Copeland. Robinson finished with 121 yards on five carries with two touchdowns, and James added 119 yards on six attempts. Copeland’s punt return for a score was the Red Devils’ fourth-straight game with a return for a touchdown. The other three were kickoff returns against Newberry, Aiken and Chapman.

Clinton’s added three more touchdowns in the first half and led 48-14 by halftime.

Smith added his second touchdown of the first half, cutting the Red Devils’ lead to 34-14 with 2:25 left in the second quarter with a winding 41-yard run that covered at least twice as much ground. Smith finished with 164 yards rushing and two scores, while South Aiken running back Jevon Edwards turned in a game-high 182 yards on 28 carries that included a 61-yard touchdown run just before halftime.

Clinton quarterback Austin Copeland completed 3 of 5 pass attempts with two of them going to younger brother Jishun Copeland. The two hooked up on scoring passes of 32 and 76 yards in the second quarter. Jishun Copeland had two receptions for 108 yards, both of them for touchdowns, and another 51 yards rushing on five carries.

The two teams exchanged touchdowns in the second half. Robinson scored his second touchdown of the game on a 15-yard run with 3:20 left in the third quarter. The Thoroughbreds finished out the scoring with a 74-yard run by Tylan Creech.

The Red Devils (6-0) begin Region 3-3A play next Friday at Union County. Kickoff is set for 7:30 p.m. Union County (2-3) is coming off back-to-back losses to Laurens and Chapman. Chapman defeated the Yellowjackets 31-6 Friday night.