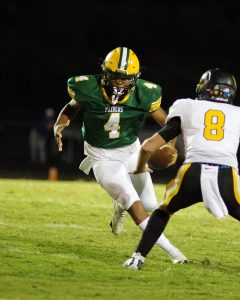 Laurens seemingly took out four weeks of frustration on visiting Union County Friday night at K.C. Hanna Stadium. The Raiders dominated the Yellowjackets 44-14 to pick up their first win of the season.

Linebacker Jordan Roberts returned a Ben Black interception 20 yards for a touchdown to start what would become an avalanche of points for the Raiders (1-4).

A Jaedon Goodwin interception set up Laurens next score – a 35-yard touchdown pass from Nick Fowler to Jackson Martin with 5:36 left in the first quarter. A fumble recovery set up a 37-yard Roberto Luna field goal.

“The defense played great and got us a lot of turnovers early on, and it kind of snowballed from there,” said Laurens head coach Daryl Smith.

Fowler was making his first start at quarterback this season  – and just the second of his varsity career – after James Rawl was ruled out due to a knee injury he suffered in last week’s overtime loss to Chapman. Rawl, a three-year starter, could be lost for the remainder of the season.

Gemire Darden, who led the Raiders with 69 yards rushing, scored on runs of 9 and 17 yards. Fowler added a 1-yard run in the third quarter to put Laurens ahead 38-0.

Roberts added a 25-yard touchdown run in the fourth quarter, scoring his third touchdown in the last two games. He also scored on a 29-yard run against Chapman.

The Raiders return home next week when they host Class 5A foe T.L. Hanna. 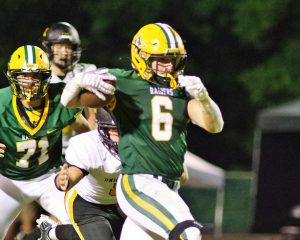 GAME NOTES: Rawl announced on Twitter earlier this week that he is committed to play at Anderson University and head coach Bobby Lamb. Anderson is set to begin play in its inaugural season of college football in 2024. . . . Roberto Luna’s 37-yard field goal was his second-longest of the season. He connected on a 40-yard FG against Belton-Honea Path. . . . Fowler is now 2-0 as a starting QB with the Raiders varsity. He started one game last season, a win over White Knoll.