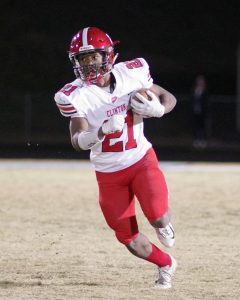 The Red Devils ended a four-game losing streak against the Panthers emphatically Friday night with a 49-19 road victory.

Jishun Copeland was one of two 100-yard rushers for Clinton, gaining 104 yards and scoring three rushing touchdowns on nine carries as the Red Devils rolled up 478 yards on the ground while averaging 9 yards per carry. Two of Copeland’s three scores came in the first quarter.

Bryson James added a game-high 124 yards and a first-half touchdown as the Red Devils (5-0) jumped out to a 21-0 lead early in the second quarter. Jayden Robinson added 92 yards on the ground with a touchdown.

Six Clinton touchdowns came on the ground and one on special teams.

The Red Devils, ranked No. 5 in Class 3A, returned a kickoff for a touchdown for the third straight game. James returned the previous two kickoffs for scores against Newberry and Aiken. This time, Justin Copeland answered the Panthers’ first score of the game with a 70-yard kickoff return for a score.

Chapman owned a four-game winning streak over the Red Devils, dating back to 2015. The Panthers edged Clinton 27-26 last season to hand the Red Devils their only loss during the 2021 regular season.

Clinton returns home next Friday and will face South Aiken at Wilder Stadium in the Red Devils’ final non-conference game of the regular season. South Aiken (1-4) has lost four straight games since a Week 0 victory over Silver Bluff.