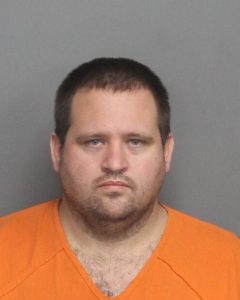 Tollison entered the guilty plea after admitting to recording on video as many as six former female colleagues in various stages of undress under the guise of uniform fittings. He invited the women to change clothes in his office where he recorded them clandestinely with his computer.

He is also charged with taking liberties with at least one woman under the guise of training, requiring her to remove her pants to demonstrate proper search techniques. He also attached an item on his own genitalia and required a female officer to find it under the pretense of training.

“The people in positions of public trust should be held to a higher standard,” said Judge Walton J. McLeod IV as he accepted the plea arrangement. “This was a monumental violation of trust. . . . This one hurts, and it should never happen.”

At least four of the victims were present in the courtroom for the sentencing. One spoke in person, while several others submitted written statements that were read aloud into the court record.

“There isn’t a word to describe how angry I was and how angry I am,” one of the victim’s statement read. “And under all that anger, there is a level of humiliation that should never be felt.”

The victim who spoke directly to the court while wearing her Laurens County Sheriff’s Office uniform, asked for more severe punishment for Tollison.

“I think he deserves as much punishment as he can get,” she said.

Another victim wrote that Tollison “stole my sense of privacy and comfort” after betraying her trust as both a colleague and as someone she considered a friend.

Tollison apologized to his family, which was in the courtroom, the victims and to members of the LCSO, about 10 of whom were in court as well.

LCSO Chief Deputy Chris Martin said he and his colleagues were expecting a heavier sentence for Tollison on the 11 indictments he faced.

“We think he deserved a lot more,” Martin said of the plea arrangement. “He won’t even serve one month in jail for each victim. That’s just not enough.”

Tollison’s case was turned over to the S.C. Law Enforcement Division (SLED). There are now two more SLED investigations for excessive force against prisoners, one of which involved the death of an inmate last July. Two other former detention officers were arrested by SLED last week and are accused of beating an inmate.