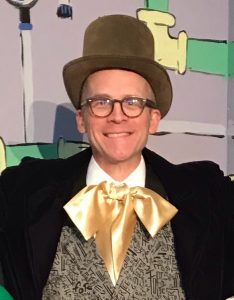 Clinton, S.C. – In March of 2020, the Laurens County Community Theatre had just completed the first of its two weekend performances of Roald Dahl’s “Willy Wonka Jr.,” when the nation and the state shut down due to COVID-19. Last weekend the children’s musical finally returned to the stage for two weekends with the same show, a somewhat new cast and a new location at Clinton High School’s auditorium.
Stan Walsh again plays the intriguing Willy Wonka and Bennet Nolan returns in his role as Charlie, said LCCT Board Member Kay Addison. It’s a large cast, with close to 50 adults and children.
For several years Thornwell’s Gilliam Center for Performing Arts had become the home stage for LCCT, but between the pandemic and the growing space needs of Thornwell Charter School, those plans changed.
Now this weekend, from Thursday through Saturday afternoon, the show will again play in the Clinton High School auditorium at 18132 72 E, Clinton, S.C.
CHS auditorium has worked very well, Addison said, including blending of the technical equipment brought in by LCCT volunteers.
For this final weekend’s production, curtain is 7:30 p.m. each night on Thursday, Sept. 15; and Friday, Sept. 16. A Saturday matinee is set for Sept. 17 at 3 p.m.
The musical production is directed by Ami Vaughn and the musical direction is under Melissa Moore. It’s based on the book, “Charlie and the Chocolate Factory” by Roald Dahl.
Anyone who would like to volunteer or make donations can contact the LCCT at www.lcct.net.

This story originally ran Page 1 in the Sept. 7 issue of The Laurens County Advertiser.