If Presbyterian learned anything in its 21-13 victory over Virginia-Lynchburg Saturday at Bailey Memorial Stadium, it’s that there’s probably no such thing as a cupcake this season. 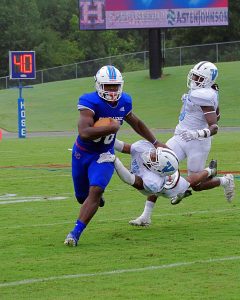 The Blue Hose (1-1) handed first-year head coach Steve Englehart the first win NCAA Division I victory of his career and his first at the helm of the PC program. Englehart took over the job in January following the resignation of Kevin Kelley, whose “never-punt” offense lasted one 2-9 season in Clinton.

Junior tight end Worth Warner scored the first two touchdowns of his collegiate career in the second half as PC overcame an early second-half deficit with three touchdown passes from starting quarterback Nate Hayden.

If PC was expecting a cupcake in barnstorming Virginia-Lynchburg, a member of the National Christian Collegiate Athletic Association (NCCAA) who will not play a single home game this season, that is not what they found.

The victory was one that PC wanted and needed, but not one Englehart and his players were particularly pleased with in the end.

“It seemed like the guys weren’t too excited about the win because they know they didn’t play particularly well,” Englehart said. “But it’s obviously always good to get a win, and you’ve got to enjoy them when they come because sometimes they’re hard to get and sometimes they’re few and far between.”

That has been the case for both PC and Virginia-Lynchburg lately.

The Dragons (0-2) took advantage of three PC turnovers to frustrate PC’s offense, taking a 7-0 lead on a 50-yard scoop and score from Alvaro Ortega-Morales. Ortega-Morales picked up a Mikai Stanley fumble and dashed untouched to the end zone for the score with 1 minute, 16 seconds left in the first quarter.

Virginia-Lynchburg made that lead stand up for more than a quarter, but Hayden connected with freshman Dominic Kibby on a 41-yard touchdown strike to cap a 10-play, 80-yard drive and tie the game at 7-7 heading into halftime. Kibby led the Blue Hose with seven catches for a game-high 110 yards in his second collegiate game.

“We gave it to them three times, and then the penalties hurt us,” Englehart said. “I think we really just shot ourselves in the foot way too many times in crucial situations.”

All 13 of the Dragons’ point came off PC turnovers.

But after failing to find its footing for most of the first half, the PC offense was able to put together scoring drives as Hayden and Warner connected twice in the red zone.

“It’s a lot more fun,” Warner said. “The tight ends that were here last year kind of got thrown into more of a receiver role, which isn’t really what we do. It feels good to just to be back (at tight end) and just running some routes when we needed to.”

Following a tipped interception, the Dragons cut the PC lead to 21-13 on a 28-yard pass from C.J. Brooks to Donmonic Perks, who finished with a team-high 105 yards on seven catches, with 2:34 left in the game. The point-after attempt was blocked, and PC was able to salt the game away from there.

GAME NOTES: Ty Englehart saw significant action as Hayden’s backup, and Coach Englehart said it’s part of a plan to get his younger quarterbacks some needed experience for the future. He said he expects Ty Englehart and Tyler Wesley to see snaps this season. The younger Englehart had 8 carries for 38 yards and threw for 42 yards on 4 of 8 passing. . . . Nate Hayden, a junior college transfer from Minnesota State, underwent shoulder surgery in the offseason. The Flower Mound, Texas native arrived at PC after Kelley had initially offered him a spot last fall and current PC assistant and recruiting coordinator Jayson Martin followed through with him.