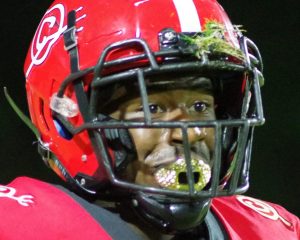 Justin Copeland broke a 7-7 tie when he scored on a 35-yard pass from twin brother Austin Copeland with one minute, 24 seconds left in the first quarter.

That was the first of six unanswered touchdowns for Clinton. Jayden Robinson scored on runs of 4 and 2 yards to open the second quarter.

For the second straight week, James returned a kickoff for a touchdown. This time, he returned the second half kick 94 yards to put Clinton ahead 42-7. He added a 2-yard run with 9:38 left in the third quarter to close out the scoring for the Red Devils (4-0).

James turned in his third 100-yard rushing performance of the season, finishing with 103 yards on 10 carries.

The Red Devils ran for 244 yards on the ground and another 77 yards passing by Austin Copeland, who started the scoring with a 26-yard pass to Kadon Crawford. Two of Austin Copeland’s three pass attempts went for touchdowns.

Meanwhile, Clinton’s defense shut down Aiken’s rushing game, holding the Hornets (0-3) to minus-15 yards on the ground. Over half of Aiken’s 152 yards of total offense came on an 83-yard touchdown reception by Braydon Staley in the first half.

The Red Devils travel to Chapman (1-3) for another non-region contest next Friday night (Sept. 16).