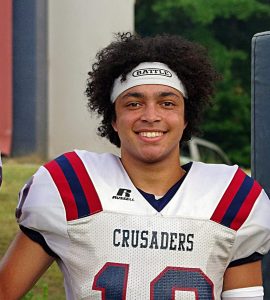 The magic number for Laurens Academy Friday night was 50.

LA exploded for 50 points in the first half of a 50-30 road victory over Oakbrook Prep in Spartanburg.

Crusaders senior running back Clarence Bertoli also scored the 50th touchdown of his 29-game varsity career, and added a 51st and 52nd as part of a four-touchdown performance.

LA (3-1) also got a pair of touchdowns from receiver Buddy Baker on receptions from Andrew Codington as the Crusaders led 50-0 by halftime.

Oakbrook Prep (0-3) scored all of its points in the second half with the game well out of hand.

The Crusaders return home next Friday (Sept. 16) to face Wardlaw as they open the SCISA Region 1-1A 8-man schedule.