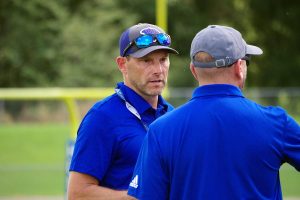 Presbyterian football is taking the first train to Clarksville.

Well, technically, it’s a bus (or two), but the destination is the same. The Blue Hose are set to open the 2022 season and the Steve Englehart era against Austin Peay Saturday in Clarksville, Tennessee.

Englehart took over as head coach in January following the departure of Kevin Kelley after one 2-9 season at PC, the program’s first as a full member of the non-scholarship Pioneer Football League. His tenure at Division II Florida Tech ended when the school canceled its football program due financial restraints.

Kelley’s “never punt” mantra, which had delivered him nine high school state championships at Pulaski Academy in Arkansas, was disastrous for PC, which has spent the better part of two decades trying to find its footing in the NCAA Division I landscape since making the move from Division II 15 years ago, first with scholarships and then without.

“We’re going to put out a product that is going to make our alumni, our Clinton community and our campus community proud,” Englehart said during a recent interview with S.C. SportsTalk radio. “We’re going to win a Pioneer Football League championship. I don’t know when that will be, but that’s what we’re going to do.

“I think we’ll have the discipline and the hardness of a team to be able to persevere and do that.”

The first step to those lofty goals begin at Austin Peay.

The start of PC’s Englehart Era will be tougher than St. Andrews and Fort Lauderdale, which was playing its first intercollegiate game a year ago.

The Atlantic Sun and NCAA FBS member Governors will be a tougher task, especially for a non-scholarship team with 60 freshmen on its early roster. 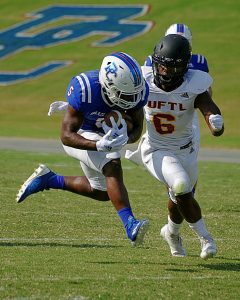 PC is returning 40 lettermen (14 offense, 25 defense, 1 specialist) on a roster of around 110, including five starters on offense and four on defense.

On defense, Alex Herriott returns at linebacker after tallying 61 tackles, including three for loss and eight sacks last season. Defensive back Merrel Payne also returns with linemen David Kinard and Davin Moses. Linebacker Tyrese Moses, a Laurens product, also returns as a fifth-year senior after missing most of last season with a knee injury.

A depth chart released by PC Monday lists junior college transfer Nate Hayden as the starter at quarterback. Hayden of Flower Mound, Texas (Dallas Christian) transferred from Minnesota State where he was an NJCAA All-American and the NJCAA Region 13 Player of the Year. Last season, he threw for 2,546 yards and 18 touchdowns in nine games.

The Governors are coming off a 38-27 loss at Western Kentucky. The 27-point output was the highest point total Austin Peay has amassed against an FBS opponent since 2017 and second-most in program history.

Austin Peay trailed the Hilltoppers 21-20 with just over 8 minutes left in the third quarter, but Western Kentucky scored on its next two possessions to put the game away.