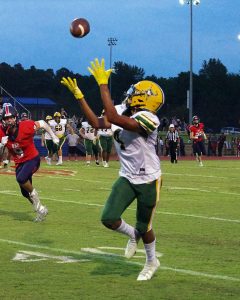 Laurens WR Nick Foster (4) catches a pass and takes it 53 yards for a touchdown Friday night in the Raiders’ 48-20 loss to Belton-Honea Path.

BELTON – For the second straight week, Class 3A Belton-Honea Path played up in classification and came away with a victory.

A week earlier, BHP (2-0) defeated Class 5A Westside 19-17 behind 204 yards rushing from sophomore running back Marquise Henderson, but Henderson was suffered thigh bruise during practice earlier this week and did not suit up against the Raiders.

Instead, four BHP runners led by quarterback A.J. Pendleton combined to rush for 246 yards and four touchdown s against a porous Laurens defense. Pendleton ran for three touchdowns – 25, 11 and 10 yards – and threw for two more scores as the Bears led from wire to wire.

BHP jumped out to a 14-3 lead, but Laurens senior quarterback James Rawl connected with Nick Fowler on a 53-yard touchdown on the opening play of the second quarter to cut the Bears’ lead to 14-10.

The Raiders got no closer as Pendleton scored two of his rushing touchdowns in the second quarter and BHP stretched its lead to 27-13 by halftime.

Senior kicker Roberto Luna connected on first-half field goals of 33 and 39 yards for the Raiders (0-3).

Rawl threw for 169 yards on 18 of 29 pass attempts. He also connected with Cayson Elledge on a 16-yard touchdown pass with 8 minutes, 15 seconds to play to cut the BHP lead to 41-20. BHP added a 1-yard touchdown run from Shaheem Robbs in the game’s final 2 minutes to extend the lead to 48-20. 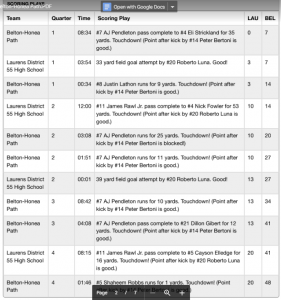