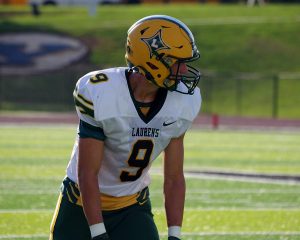 LDHS WR Jackson Martin (9) scored the Raiders’ lone touchdown against Hillcrest Friday night in a 41-7 loss to the Rams.

Hillcrest, ranked No. 5 in Class 5A, exploded for 20 points in the third quarter to break open a close game en route to a 41-7 victory over visiting Laurens District High Friday night in the season opener for both teams.

LDHS (0-1) took a 7-0 lead with 5 minutes, 3 seconds left in the third quarter on a 10-yard pass from senior quarterback James Rawl to senior receiver Jackson Martin.

But that was the last good news the Raiders had all night as the Rams reeled over 41 unanswered points.

The Rams also scored on a 90-yard kickoff return by Broderick Jones on the heels of the Raiders’ lone score. Hillcrest added a second special teams score in the final minute of the game, blocking a Martin punt and recovering it in the end zone.

Rawl completed 20 of 32 passes for 147 yards the touchdown and an interception.

The Raiders plays their second straight road game to start the season next Friday when they travel to intra-county rival Clinton.