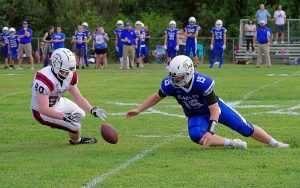 Laurens Academy handed Travis Plowden his first victory as a head football coach Friday night, defeating the Augusta Eagles 56-38 at Todd Kirk Field  in the season opener for both teams.

LA led 14-6 at halftime but exploded for 42 second-half points.

Fellow senior Clarence Bertoli scored on runs of 30 and 8 yards and added a kickoff return for a touchdown to help LA pull away in the second half.

Plowden took over as head football coach in June after Stacy Bell, who had been hired to replace long-time head coach and LA headmaster Todd Kirk, resigned without coaching a game with the Crusaders.

LA (1-0) travels to Richard Winn Academy in Winnsboro next Friday.

Photos from LA’s 56-38 victory over the Augusta Eagles: