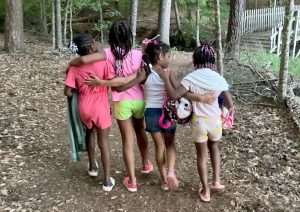 Fellowship might just have heard some big screams recently, as. children taking what for most was their first-ever pontoon ride gleefully screamed as their boat passed underneath Cothran Bridge.

“We did boat rides yesterday and for most of them it was the first time being out on the lake,” said Camp Fellowship Director Kevin Cartee. “And then they really had a good time when we said they could scream as we went under the bridge.”

As it turns out, it was just one of many firsts for most of the 28 children there at Camp Fellowship for a three-day intensive Impact 2 Purpose (I2P) summer camp.

It’s the first time the two Laurens County non-profits have partnered in a mini-camp, and it was only possible through extensive donations and sponsorships to Camp Fellowship for the event and considerable fundraising by Impact2Purpose (I2P), which is directed by founder Rhonda Gary.

Camp Fellowship Camp and Conference Center is located on Lake Greenwood in Waterloo, and each summer offers camps run by the summer staff, which includes 16 college students and lifeguards. 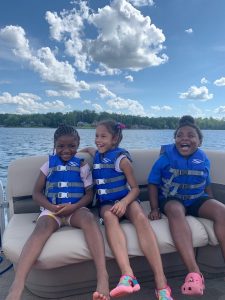 “This was the last week of our summer program and we wanted to do something special as part of that,” Cartee said. “That’s how Rhonda and I began talking about partnering together to have a camp just for the students that have been involved with I2P.”

For many of them this was their first time away from home and the first time camping in rustic cabins. For some it was their first time to don a life jacket and swim in Lake Greenwood, much less get to experience a pontoon ride – all very different from the 8-week summer camp Impact2Purpose has held in past years, which includes a day-camp format heavy in school work.

“A lot of kids camps are only for education and math skills which is important, but we wanted to give them a camp-like setting because a lot of these kids don’t get to go on vacations or even know this lake exists,” Gary said.

As part of the Chamber’s Leadership Laurens County program, Gary had visited Camp Fellowship. After working out a plan with Cartee, parents and volunteers with I2P began fundraising, and with the extra donations to Camp Fellowship and a small contribution from several parents, 28 children were able to attend the three-day camp.

While it’s the first time Camp Fellowship has partnered with I2P, Cartee said the camp goes along perfectly with Camp Fellowship’s mission, even down to the wide range of ages. Its summer staff swells to 16 with college student counselors and lifeguards from across the Southeast, which provided plenty of oversight for the children.

“We have had all ages, I think from kindergarten into high school,” Cartee said. “It’s a great experience and it’s really the model of camping that we foster here. All of our programs are built on that family-type unit so having all ages together does work because we’re all brothers and sisters ultimately. That’s part of our message.”

The camp also included a Hawaiian luau for children and parents at the start of the camp week, and the final awards day included a parenting workshop where packets were presented which included resources for optional classes, such as Thornwell’s Strengthening Families classes starting later this month, and information for the family’s financial health.

I2P children are primarily from families which fall below the $30,800 income level, Gary said, and the I2P staff and volunteers spent much of the pandemic serving as mentors, with its facility serving as an internet hot spot for students.

The Impact2Purpose first had a small building on South Harper Extension, Laurens, and when that lease expired, it began using the H.D. Payne building in Clinton for group mentoring opportunities. It also increased its information and assistance beyond the children to their families, and gradually developed plans for an expanded version of I2P.

“We started planning to built an I2P Center for Youth and Community Development,” Gary said. “If a single mom loses her job or has financial struggles, they can lose their home and the children are impacted, and so for more than a year we have been working to raise money for a center.”

The next fundraiser is the second annual “Walk N Purpose 2K” on Saturday, Aug. 13, starting at the H.D. Payne Building, 876 Airport Rd., Clinton. Registration is $10 for children under 10 and $20 for everyone older, and the local Modern Woodman of America will provide matching funds up to $2500.