Clinton, S.C. – The D.E. Tribble Building on Gary Street is 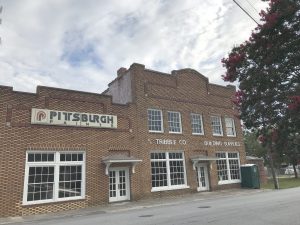 another step closer to its renovation into a beer and wine taproom after Clinton City Council voted unanimously this week to adopt a resolution that determines the eligibility of the historic properties at 1111, 1113 and 1115 Gary Street as eligible for the Bailey Bill.

The Bailey Bill is a form of tax incentive which can only be used for the renovation of historic buildings, as long as those renovations follow historic guidelines and maintain the original building’s facade and character.

Charlie Michaels, the owner of the buildings, requested the resolution for all three former hardware and lumber buildings, although his plan for the two story 1115 Gary Street building is to eventually create a beer and wine tap room and call the business The Lumberyard, said Marvin Moss, the director of Clinton Economic Development Corporation.

Michaels plans to have the renovations completed and the business open sometime during the spring of 2023, Moss said.

Under the City of Clinton’s statutes, said City Attorney Allen Wham, the Bailey Bill stipulates that the taxes for the first two years remain at the tax value of the building prior to repairs, then increases to a 40 percent discount for the eight following years.

Moss explained that the Bailey Bill requires that the renovation work be done up front at fair market costs, and the impact of the tax incentives are “at the back end.”

The State Historic Preservation Office (SHPO) is the agency which dictates whether or not the historic properties of the building are being maintained throughout the process, Moss said. Moss was unaware of Michaels’ plans for the upstairs portion of 1115 or the other two structures.

Moss explained that qualification for the Bailey Bill does not require the property to be on the National Historic Register, although these particular buildings are already on the register. They would only be removed from the historic register or become ineligible for the Bailey Bill if changes were made which were against SHPO’s regulations.

In other business, city council presented a resolution to congratulate Frances Young Judon for her 100th birthday on June 30, 2022, and also to congratulate Clinton Middle School student Ryan Scott Campbell, who qualified for the USBC National Junior Gold Tournament for bowling held in Grand Rapids, Michigan, in late July.

Campbell finished as the runner-up in the Under 12 Boys competition among 227 national bowlers.