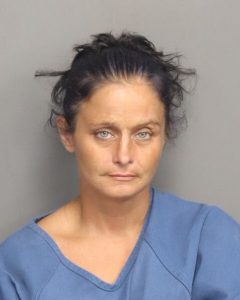 A Fountain Inn woman is headed to prison for 15 years after pleading guilty Wednesday morning to charges stemming from a 2020 incident during which she fired shots at deputies while attempting to flee from them.

Melissa Ann Miller, 40, pleaded guilty Wednesday morning to one count of assault and battery, high and aggravated in nature and one count of failure to stop for a law enforcement vehicle.

Miller changed her plea to guilty when a Laurens County jury assembled to begin her jury trial at the Laurens County Hillcrest Judicial Complex. Circuit Judge Frank Addy accepted her guilty plea on charges that are classified violent under state law, meaning that Miller is not eligible for parole must serve at least 85 percent of the sentence before her release from prison.

In June 2020, investigators were searching for Miller to serve active arrest warrants. Investigators spotted Miller driving a gold car with a license tag that did not match the vehicle and a suspended license. When investigators attempted to initiate a traffic stop, Miller fled and a high speed chase ensued around Gray Court. A deputy was able to disable Miller’s vehicle by flattening her tires with spike strips. Once Miller’s vehicle hit the spike strips, she jumped out of the vehicle and fled on foot around the area of Prairie Court on Highway 101. During a foot chase with deputies, she fired three rounds at them from a .45 caliber handgun. Fortunately, none of the shots found their mark, but one deputy suffered a minor leg injury during the chase. Miller was able to briefly escape through the woods. Deputies eventually located her at a nearby residence where she was taken into custody. Miller admitted to firing the shots at police.

“It is wholly unacceptable to shoot at law enforcement officers who are simply doing their jobs keeping our community safe and trying to get home safely themselves to their families at night,” Stumbo said. “My office takes very seriously any attacks against our police partners and will continue to seek justice to the fullest extent of the law for those that attempt such malicious attacks in the 8th Judicial Circuit.”