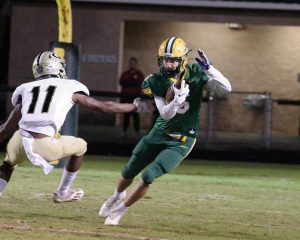 After all, social media had played a vital role in Elledge’s recruitment, serving as a platform for players to market themselves and a virtual highway for college coaches as they scour the country for talent.

“(Social media) was the biggest part of it for me,” Elledge said. “If I had never downloaded Twitter my freshman year, it may not have happened like it did. I started getting contacts from coaches and everything got started.”

Elledge, who received interest from some of the top academic schools in the U.S., including Harvard, Dartmouth, Penn and Princeton of the Ivy League and Army, said he chose Davidson because of its academic reputation, the program’s  recent successes in the non-scholarship Pioneer Football League, and its location in the region. As a potential business major, he also said Davidson’s proximity to the banking hub of Charlotte as a bonus for internship opportunities down the line.

While Elledge dutifully thanked coaches for hand-written notes and interest he received during the recruiting process, LDHS football coaches were also using Twitter to keep his name in front of college coaches.

“Get on this guy! Great transcript, Elite hands and route runner,” a Tweet from the LDHS football team’s account read.

“It’s not like the old days when college coaches would come in and get film on guys from the high school coaches,” LDHS head coach Daryl Smith said.

Now, individualized game highlights are available on platforms like Hudl. When those highlights are connected with stats and other info such as GPA, honors and accolades and statistics.

Smith said his staff has tried to helped guide players with best practices for social media when they set up their pages.

“We’ve done some education with our players,” he said. “We’ve brought in some experts to talk to them about how to use social media and, really, to not put anything that will hurt them out there.”

Clinton High Offensive Line Coach Mathew Bennett added social media responsibilities to his job description with his personal page as well as for the Red Devils.

He uses both to interact with supporters and to keep Clinton players in front of college coaches as the Red Devils pursue their dreams of football careers and educations after high school.

Clinton’s success a year ago — a 12-2 season and run into the third round of the Class 3A playoffs — has shone a light on the Red Devils’ program and college coaches are once again finding their way to Clinton, so the players’ social media presences are even more important.

“More college coaches have come through the door since the end of last season than have been here at any other time that we’ve been here,” Bennett said. “I don’t know why that is. I don’t know if it’s a stigma or what, but we’re trying to promote these kids because this is a different kind of Clinton kid. These are kids who have the grades and their play on the field speaks for itself.”

It has never been easier for college coaches to find and communicate with recruits. Everyone knows where the five-star players are — the ones touted by online recruiting services. 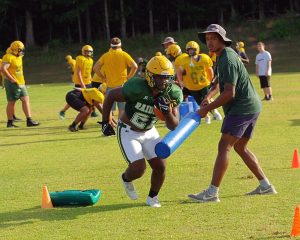 But there are so many others looking for opportunities to continue to play and to get college educations. Maybe at the Division II or III level or at the FCS Division I level. LDHS senior linebacker Gemire Darden, whose Twitter page says he’s a two-star linebacker, is one of those.

He recorded 108 tackles with four interceptions as a junior while also seeing time at running back. He has the grades, the stats and the intangibles.

Now, he wants a shot at the next level.

When a Florida A&M assistant coach asked players to send him info, Darden quickly responded. He’s taken junior visits to The Citadel and Presbyterian, and NCAA Division II Anderson, which is to play its inaugural football season in 2024. He has interest from other Division II programs such as Tusculum and Lenoir-Rhyne.

“(Coaches) tell me I’m on their radar, but they haven’t offered me yet,” he said.
But his commitment to using social media to his advantage could be the difference between now and NCAA Signing Days in December and February.

Elledge knows that as well as anyone after finding his fit at Davidson.

“It’s really about how you market yourself, honestly,” Elledge said.