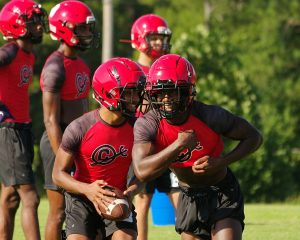 Clinton and Laurens District High football programs began practices for the upcoming season Friday, and both teams are to host scrimmages this week.

The Red Devils are to host A.C. Flora and Chesnee at 9 a.m. Thursday at Wilder Stadium. On Monday, Chapin will visit Clinton at 7 p.m.
LDHS is to host Mauldin at 9 a.m. Thursday at K.C. Hanna Stadium. J.L. Mann will visit LDHS Monday with the scrimmage tentatively set to start at 6 p.m. LDHS head coach Daryl Smith said it could be moved back to 7 p.m. due to heat concerns as Clinton’s was.
Both Laurens and Clinton are set to compete in the Bill Pate White Rose Football Classic at York Comprehensive High School on Aug. 12.
The Raiders are scheduled to kick off the jamboree at 6 p.m. against Fort Mill. Clinton will close the event at 9 p.m. against host York.
Class 5A Fort Mill went 1-8 last season, while York was 7-3 in Region 3-4A.
Providence is also scheduled to face Blythewood at 7 p.m., and Clover will meet Providence Day at 8 p.m.
The football regular season begins the next week (Aug. 19) with LDHS traveling to Hillcrest and Clinton hosting Batesburg-Leesville. Laurens Academy is to host the home-schooled Augusta Eagles in the head-coaching debut of Travis Plowden with the LA varsity football program.

This year’s Clinton High football team will honor the 1972 Red Devils’ Class 3A state champions with a commemorative sticker that will adorn the Red Devils’ helmets all season.

The 1972 champions, which went 11-0-1 and defeated Hanahan 32-0 in the state finals, will hold their reunion on Aug. 26 as Clinton hosts intra-county rival Laurens at Wilder Stadium.

As part of the golden anniversary celebration for the 1972 team, Red Devils’ flagship radio station, WPCC, will feature halftime highlights from the championship season, and home game programs will contain special pages highlighting the 1972 team.